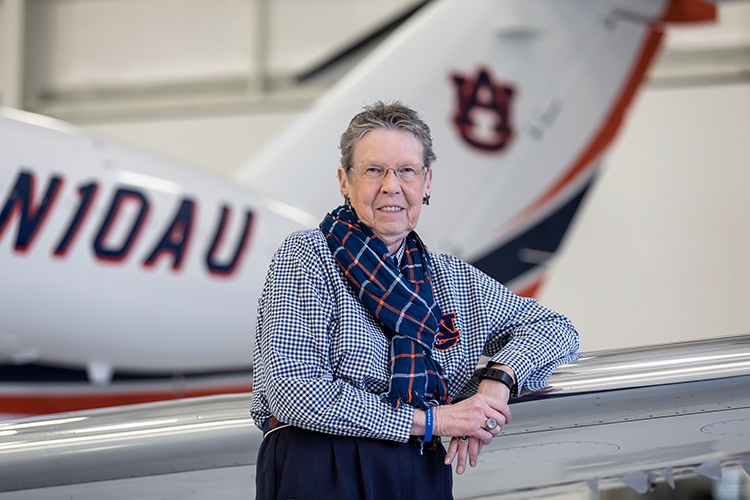 The Legend of Nelda

Young lady, this is an engineering course—you must be in the wrong room.

Judging by her career, Nelda Lee was most definitely in the right room.

After becoming the second woman to earn an aerospace engineering degree from the Samuel Ginn College of Engineering in 1969, Lee went on to a phenomenal 45 years in flight and ground test engineering with Boeing.

In 2017, she was honored with Auburn University’s Lifetime Achievement Award. Calling her an Auburn legend wouldn’t be an overstatement.

Nor would calling her a pioneer in women’s aviation.

On April 29, 1980, Nelda Lee became the first woman to fly an F-15 Eagle, the plane she helped design and devoted nearly half a century to.

In 2004, she was voted into the International Women in Aviation Pioneer Hall of Fame.

All of which is to say her qualifications to serve as a mentor for 100+ Women Strong are second to none.

So why did she initially feel unqualified for the job?

“Well, I didn’t want to come up with an excuse, but I’m a lot older,” Lee said with a laugh. “I thought the things I did once upon a time might not really 100 percent apply in the real world today. I thought, ‘well, maybe they should find a younger person. The job environment has changed. I went with one job forever. These days, people change jobs every two years or something.’ I said ‘well, maybe I shouldn’t do it,’ and I tried to back out.”

But when she learned that not one or two, but five women studying aerospace engineering were in the market for mentors, she couldn’t say no — to any of them.

Turns out, the unique perspective Lee thought might be irrelevant to her mentees was exactly what they were looking for out of the 100+WS mentor program.

“I wanted to learn more about the struggles that women have gone through before me and to get her take on the struggles we still face being in STEM and in a working environment that’s predominantly men,” said sophomore Lucy Bone. “She’s really awesome about listening to all of us and talking about the things that she faced.”

Bone still hasn’t decided which facet of aerospace she wants to pursue after graduation.

“But,” she said, “I would feel comfortable reaching out [to Lee] about almost anything, especially career moves and what comes next.”

Sophomore Sydney Flynn, another one of Lee’s mentees, agrees.

“I really enjoyed meeting with her,” Flynn said. “She worked with a lot of things I’m interested in. She’s just really sweet, and it was exciting talking her. She gave me a lot of good advice. As a woman in engineering, there’s a not a whole lot of us. I was looking to someone for some guidance whose gone through it before.”

Though Lee readily acknowledges that plenty of obstacles still remain for women looking to enter the industry, she takes pride in the huge strides made in the 50 years since she roamed Ramsay Hall.

“Sometimes they’d even say I was in the wrong building.”