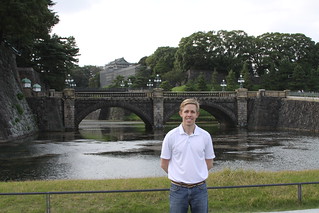 He thought he’d attend college at another school – not Auburn. He thought he’d pursue another career – not engineering. Thanks to Auburn University’s cooperative education (co-op) program, Kevin Cullinan is an ’09 chemical engineering graduate who is enjoying life in Japan as an ExxonMobil execution planning engineer. He is giving back to his alma mater as an Engineering Keystone Society member.

GR: Why did you choose Auburn?
KC: Strangely enough, having grown up a stone’s throw away from Auburn, the decision to attend Auburn University was a late one. I guess familiarity breeds a certain level of complacency, and as a result I always thought I would attend college in another location. That being said – once it came time to seriously consider what I wanted to study and what I might be interested in doing, it became clear Auburn was the perfect fit.

GR: Why did you want to be an engineer?
KC: Again this is another decision that I came to in a rather circuitous fashion. My father is an engineer and growing up it only seemed natural I would do something different. However, when I began seriously considering my interests and the fields of work that might be a good fit, it became clear engineering was right for me. I was particularly attracted to the flexibility of career paths that could be pursued with an engineering background. Following high school I still had a fairly wide interest in potential careers, and after meeting individuals in the engineering program who entered law school, med school and industry, engineering was appealing.

GR: How has Auburn Engineering made an impact on your career?
KC: Auburn Engineering has had a huge impact on my career. It taught me technical concepts and problem solving skills that are directly transferrable and effective in industry. Equally, if not more important, were the experiences – particularly the co-op program – and the great contacts and friends made along the way. One of the strongest qualities about Auburn and Auburn Engineering is the sense of family and camaraderie in the student body and even with the faculty.

GR: How did you decide to work for ExxonMobil?
KC: As a freshman, I entered chemical engineering with an interest in specializing in pre-med. During my freshman intro class, a member of ExxonMobil came to speak and my interest was piqued. Not shortly thereafter someone from the co-op program came to speak and I realized I might have the opportunity to try something that would help with my studies, break up my schedule and offer some income. I was fortunate to be offered a co-op position with ExxonMobil and realized I enjoyed the style of work and the opportunities more than I would have pursuing a career in medicine. I was privileged to receive an offer of full-time employment after completing my co-op. It was such a great opportunity for me to try out a career and to find something I enjoyed.

GR: What circumstances led to you working in Japan?
KC: After two years in my initial role as a project engineer/manager, I transitioned to our development company which is responsible for major projects, particularly development of new fields and resources. I was assigned to the execution planning group and began working on a development which was in its early stages of conceptual study. We enlisted the help of two engineering contractors, the lead of which is headquartered in Japan, to support the design and execution planning work for the concept. I was fortunate to be one of the individuals to relocate my office in Japan to help guide their work.

GR: You are an execution planning engineer. What does this mean and what does your job entail?
KC: In the field of oil and gas projects, engineers are typically concerned with the “what:” what kind of facility, what types of equipment, what specs, et cetera. My role as an execution planning engineer is to be concerned with and optimize the “how.” Given a particular concept or design, it is my job to determine how it will be built, what the contracting strategy will be and how long it will take to design, build, install and start up.

GR: What is it like living and working in Japan, and what has been the biggest adjustment?
KC: Japan has been a great place to live and work. Living in Tokyo has been a fantastic experience. I’m a big fan of the food. The culture is interesting and the sights, sounds and experiences are one of a kind. I think the biggest adjustment was simply getting used to the hustle and bustle of Tokyo/Yokohama. There is an unbelievable amount of people in this area and rarely is there a time in a public setting when you are not in a crowd. A close second to this is learning to order food and distinguish what it is you’re ordering at restaurants, as well as navigating Japanese grocery stores. I’ve had several meals that were very good but slightly unnerving as I wasn’t sure exactly what it was that I was eating.

GR: Do you know how to write or speak Japanese?
KC: I’ve developed a certain level of functionality in speaking Japanese and have begun taking lessons to hopefully become a better conversationalist. The writing side is a different story. There are three different alphabets used by the Japanese: Hiragana, the phonetic alphabet used for Japanese words; Katakana, the phonetic alphabet used primarily for foreign words; and Kanji, the non-phonetic writing system which uses an individual character for everything resulting in thousands and thousands of Kanji characters. It is a daunting challenge, and as most of the writing tends to be a mix of Kanji and Hiragana, I’ve chosen to focus on learning to speak and not so much on learning to read . . . not being literate is a big adjustment.

GR: You have become a member of the Engineering Keystone Society. Why have you chosen to financially support the college?
KC: I have benefitted in such a large part due to the kindness of others, particularly those who are affiliated with Auburn and the College of Engineering. Having the opportunity to contribute in some way and enabling others to have similar and hopefully even better opportunities than I did is particularly gratifying. I’m also in the position of having an employer who will match my contributions, providing a benefit to the college I would be remiss not to facilitate. ExxonMobil values charitable donations, particularly in the area of higher education and matches contributions at a rate of three to one.