Thanks from a grateful student

Shernovius Bennett, a senior in software engineering, has been deployed overseas on numerous occasions during his time as an Auburn student. Most recently, he served at the Bagram Air Field in Afghanistan with the 187th Fighter Wing from Montgomery, Alabama. During his time serving in Afghanistan, Barbara McCormack, an undergraduate adviser in the Department of Computer Science and Software Engineering, worked tirelessly to ensure Bennett was able to continue his studies and complete classes as a transient student. To show his sincere gratitude upon returning from deployment, Bennett presented a flag to McCormack that was flown on his mission. 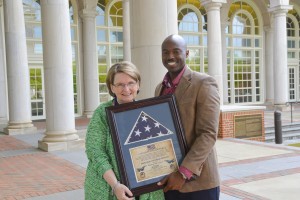 “I will forever be appreciative for the effort she put forth,” Bennett said. “This is the reason she deserved the flag, to remember her dedication will never be forgotten.”

Typically the flags flown on missions are used to commemorate the experience of serving in a war zone or to show appreciation to someone a member of the force feels deserves it. According to Bennett, without the diligent work of McCormack it would not have been possible to graduate in May.

“There is nothing having to do with my job that would ever mean as much to me as this,” McCormack said. “For him to think about doing this for me while he is in harm’s way in Afghanistan is just amazing and so very thoughtful.”