Kasey at the bat 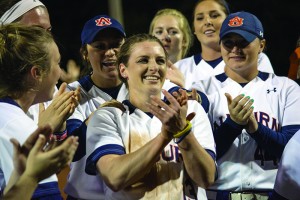 The third baseman has been a key player in Auburn’s SEC title run and has 73 RBIs on the year, which makes her Auburn’s all-time leader in the category.

Off the field, Cooper maintains a 4.0 in mechanical engineering.

This summer, she will represent the United States in the World Cup of Softball XI, the WX World Baseball Softball Confederation Women’s World Championship in Surrey, British Columbia, Canada and the Japan Cup.