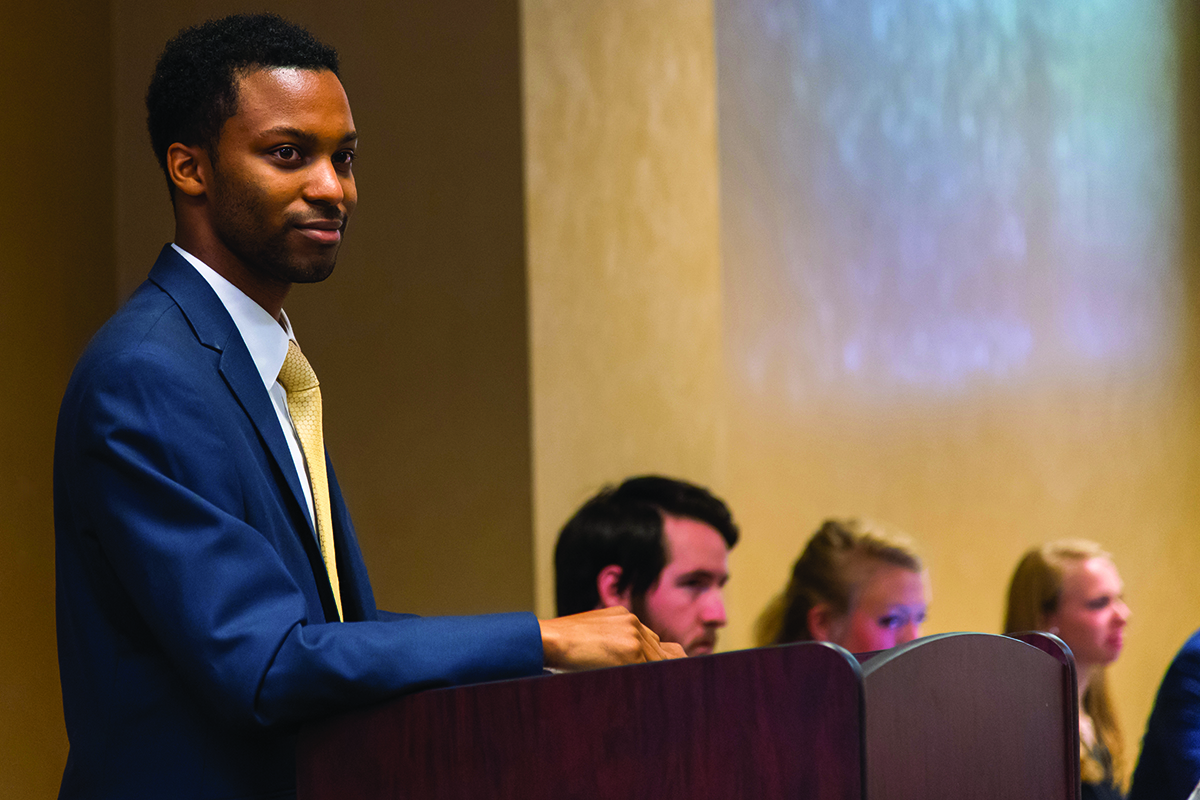 Smith, a junior in chemical engineering and newly elected SGA vice president, could use another hour, or 12, in the day. Between a rigorous curriculum and serving as one of the top student government officers on campus, Smith has the art of juggling down to an engineering science.

His meticulous organizational methods aren’t the only reason Smith has resonated so well with students and faculty. From an early age, he always pushed himself to meet and overcome challenges, which propelled him to come to Auburn. Along with an interest in the medical field and chemistry, he decided chemical engineering may be a good fit, in part because of its rigorous nature.

“I always knew chemical engineering was a difficult program, but because it had that reputation, I was drawn to it,” Smith said.
Since school always came effortlessly to Smith, he expected he could handle the course load on his own. Not long after enrolling, however, Smith learned his first of many valuable lessons since attending Auburn: he needed help. His mother told him about the College of Engineering’s Alabama Power Academic Excellence Program, founded to enhance the recruitment and retention of underrepresented students in the college. Smith walked through the door one day and hasn’t looked back since.

“I went to the AEP office as a freshman, and found a group of students who would keep checks on what I was doing in class, and I’ve grown up with them,” Smith said.

The academic support he received enabled him to succeed in the classroom and gave him the confidence he needed. Smith has now become one of AEP’s most active students and advocates. He’s been so involved that he earned a program scholarship. The student has now become the teacher.

“It’s a role reversal now. I’m actually tutoring students in introductory classes like physics, and when you’re the teacher it makes you have to know the subject matter so much better,” Smith said.

Once he had the academic tools he needed, Smith decided to get involved outside of the classroom. He always had an interest in public policy and decided to apply that passion for politics by running for SGA senator during his sophomore year. He won the office and what was once a hobby has now turned into a possible career opportunity.

“Truthfully, I could honestly see myself combining my engineering knowledge, skills and degree with my interest in politics,” Smith said. “I could see myself working for the Department of Energy or the EPA and really bring those two passions together.”

But first things first, and that’s making a lasting impact and change on The Plains.

Even though Smith only had one year of SGA experience under his belt, soon there were whispers about taking the next step and running for an executive office. Those whispers became louder and harder for Smith to ignore. Finally, after a late night at the Office of Student Involvement, two of Smith’s closest friends convinced him to take the risk and run for SGA vice president.

“Since I had only served a year as a senator, I didn’t think I was good enough to run for vice president,” Smith said. “But being the engineer I am, I thought about it, researched it and reached out to other SGA officers to discuss what it was like to be an officer. Then I made the decision to go for it.”

Smith had to work quickly, beginning in November 2016, to assemble his campaign team, which consisted of 700 students across campus. His dedication again came into play with the numerous campaign meetings he held with his team over the holiday break, and his relentless drive to meet at least 30 new people every day leading up to the Feb. 7 election. And yet again, his work ethic paid off – Smith won the vice presidential office, against two other candidates, with 48 percent of the vote.

His win was also historic for Auburn University. Smith is only the second African-American SGA vice president. The honor is one Smith does not take lightly.

“With the current political climate, this is a great step in the right direction,” Smith said. “It feels good to know that Auburn can elect a black vice president and a female president.”

At the same time, he recognizes there are a lot of perceptions and assumptions people will make, and he wants to have an open dialogue with all students, faculty and administration. He hopes to set the precedent for future underrepresented students who aspire to serve in SGA, and be the example to prove anyone with enough perseverance can serve.

“There are many people who supported me throughout my campaign, and voted for me,” Smith said. “So it’s my responsibility to fulfill my job in the best way I can and represent everyone.”

As he adjusts to his new position, that perseverance will be needed. His role comes with a lot of responsibility that he is eager to take on. As vice president, Smith oversees SGA Senate meetings every Monday night, and maintains hours in the Office of Student Involvement, where students drop by and discuss their concerns.

He is also looking to elevate Auburn University to a higher level with the help of the other SGA executive officers. After elections, Smith, Jacqueline Keck, president, and Frank McEwan, treasurer, met to discuss issues they can address in the coming year, with the help of Auburn officials.

These areas are the most important to students and have the biggest impact on their everyday lives, according to Smith,

“By working openly and having candid conversations with administration, progress will be made toward improving those key areas, and in the end, have a positive effect on students’ lives,” Smith said.

It all comes back to representing all and not just one.

“When passing legislation, we want to not just represent the best interest of the Senate, but the entire student body,” Smith said.

Accomplishing these goals and seeing tangible results is the top priority for Smith. After all, the engineer in him wouldn’t have it any other way.

“There are a ton of tasks, big and small, that need to be done in SGA, and engineering has given me the problem-solving skills needed to get things done and accomplish our goals,” Smith said.

As for the future, Smith looks forward to the day when he can say he’s an Auburn Engineering alumnus and marry his two passions into a long and fruitful career.

It remains uncertain whether Mr. Smith will go to Washington, but one’s thing is certain – he’s headed for greatness.