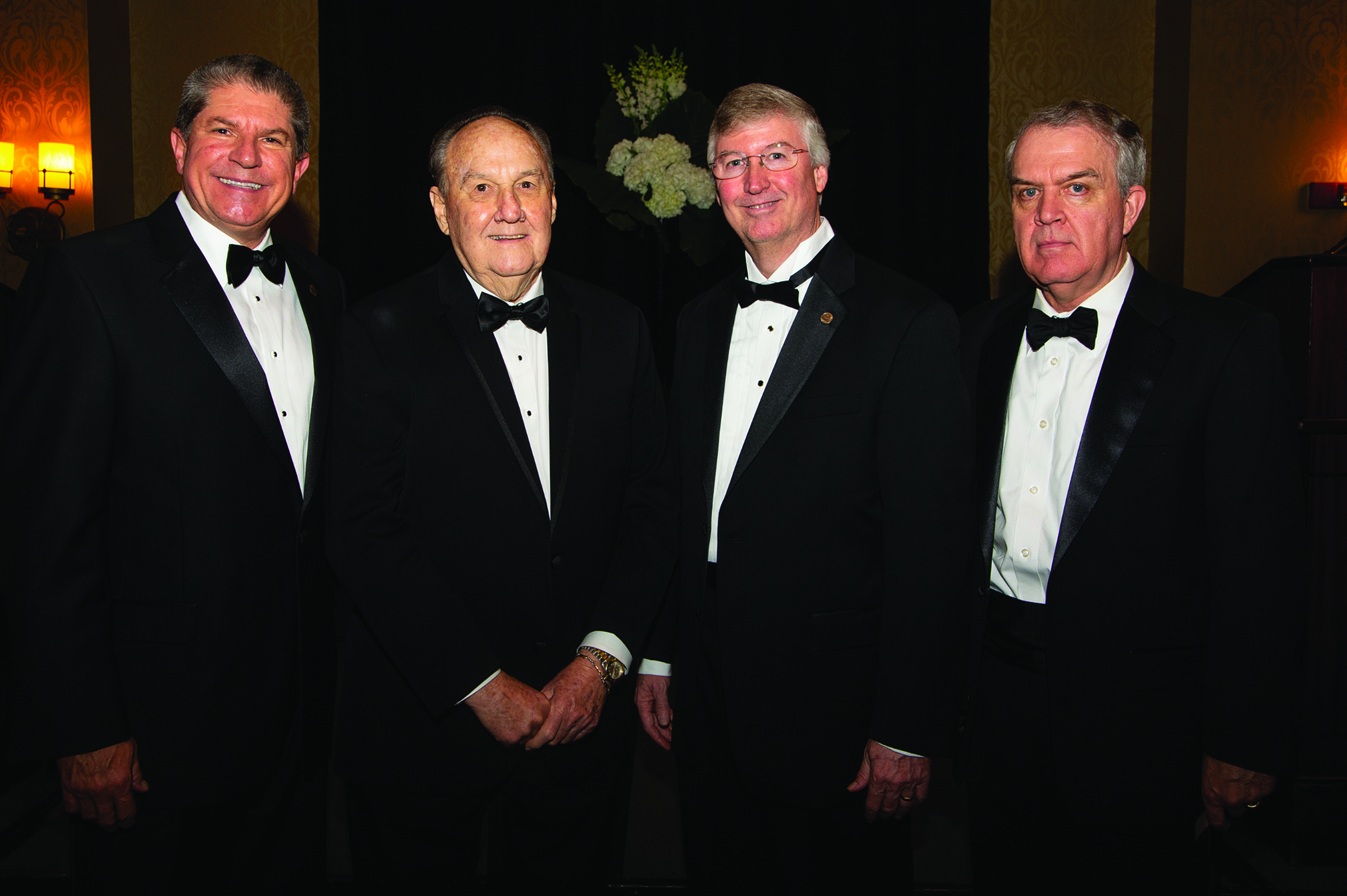 The State of Alabama Engineering Hall of Fame inducted eight individuals, including three Auburn alumni and one long-time donor, and honored a project during a ceremony at the Renaissance Birmingham Ross Bridge.

Dorothy Davidson began her career as a research mathematician with the U.S. Air Force at the Pentagon, and in 1965 she transitioned to systems engineering, working for several U.S. and German companies in Europe. She returned to the U.S. after 17 years abroad and consulted for companies that interfaced with NATO.

In 1981, Dorothy married Julian Davidson, ’50 electrical engineering, and in 1992 they moved to Huntsville. Four years later, the Davidsons co-founded Davidson Technologies, a company providing innovative engineering, technical and management solutions for our nation’s defense and aerospace industries. After Julian’s death in 2013, she stepped in to run Davidson Technologies as the CEO and chair. Her business acumen and engineering background provided a seamless transition.

The Davidsons have demonstrated a strong commitment to Auburn University and the Samuel Ginn College of Engineering throughout their careers. Julian and Dorothy have funded scholarships, programs and laboratory support within the college and the Department of Electrical and Computer Engineering, and have supported the Jule Collins Smith Museum of Fine Art as well. Most recently, Dorothy donated $5 million to the Samuel Ginn College of Engineering to renovate Broun Hall — the home of the Department of Electrical and Computer Engineering — to create the Davidson Pavilion. In addition, their philanthropic memberships have included the Engineering Eagles and Ginn societies, as well as the university’s 1856, Foy and Samford societies. Julian was inducted into the State of Alabama Engineering Hall of Fame in 2007, making the couple the first husband and wife to both be inducted into the prestigious group.

Carl Register, ’63 industrial management, joined Vulcan Materials Co. early in his career and quickly advanced to positions of increasing responsibility, culminating in his appointment as Vulcan’s Southern Division president in 1980. After 24 years with Vulcan, Register moved to Texas in 1989 to lead Redland Stone Products Co. as president and CEO.

He began his own engineering ventures in the mid-1990s, including CARCO Mineral Resources and Railcar Solutions, which produce the DoorBrute line of rail car door closing products that have garnered several patents.

Throughout his career, he has showcased an ability to mesh inventive engineering ideas with an astute business sense that has brought success to every company he has led.

The Register family has created two scholarships benefitting promising Auburn University engineering students from Alabama and Texas. These scholarships have supported numerous engineering students as they gain the skills and knowledge necessary to become tomorrow’s leaders in engineering. Register has also been an integral member of Auburn’s Industrial and Systems Engineering Alumni Council, an influential group that provides recommendations on how to better tie industry needs into the engineering curriculum. Register and his fellow council members also serve as role models to students and advocate on behalf of the department to industry and political leaders.

Zeke Smith, ’82 industrial engineering, is the executive vice president of external affairs for Alabama Power. Smith went on to earn his master’s degree in business administration from Samford University and joined the ranks of Alabama Power in 1982 as assistant engineer, and has spent the past 35 years climbing the corporate ladder to where he is today. Overseeing Alabama Power’s public relations division, charitable giving and governmental and environmental affairs departments, Smith knows the impact each of these units has on the company’s bottom line.

Prior to his most recent appointment, Smith was the vice president of financial and regulatory planning, vice president of regulatory services and director of regulatory planning and pricing. He currently assumes responsibilities over Alabama Power’s largest divisions, which is no easy feat. In fact, he runs the largest external affairs operation of any company in Alabama and each of these divisions plays a major role in the company’s bottom line. Yellowhammer News named him one of “The 50 most powerful and influential people in Alabama” in both 2014 and 2015 because of his widespread influence within the state.

Smith is a member of the Auburn Alumni Engineering Council and he serves on the advisory council of the Charles D. McCrary Institute for Cyber and Critical Infrastructure Security, which focuses on improving the security and operations of the nation’s infrastructure through research and advanced technologies.

Norm Tew, ’82 and ’84 electrical engineering, earned both his bachelor’s and master’s degrees from Auburn, and currently serves as the vice president and general manager of the Missile and Weapon Systems division of Boeing Defense, Space and Security (BDS), headquartered in Huntsville. In this role, he is responsible for a portfolio of programs that provide strategic and tactical missile and weapon system solutions for the United States and its allies across the globe.

Tew’s career has spanned more than 36 years in defensive weapon systems development, including system architecture and requirements definition, system and product design, performance evaluation, systems integration, system testing and operational fielding. Prior to his current assignment, Tew served as vice president of Engineering for the Space and Missile Systems division of Boeing Defense, Space and Security. Prior to that, Tew held key leadership positions within the GMD missile defense program, including nine years as its vice president and program director and before that five years as chief engineer. One of the early architects of the U.S. National Missile Defense system, Tew joined the GMD program to take it from concept to reality, leading the development, integration, testing, initial deployment, and sustainment along with numerous capability expansions. GMD is the United States’ only system capable of providing protection of the entire United States homeland against long-range nuclear ballistic missile attacks.

Prior to Boeing, Tew held a variety of leadership positions within Lockheed Martin Corp. in support of both ground-based and space-based missile defense programs, culminating as director, Systems Engineering, for the Terminal High Altitude Area Defense (THAAD) program.