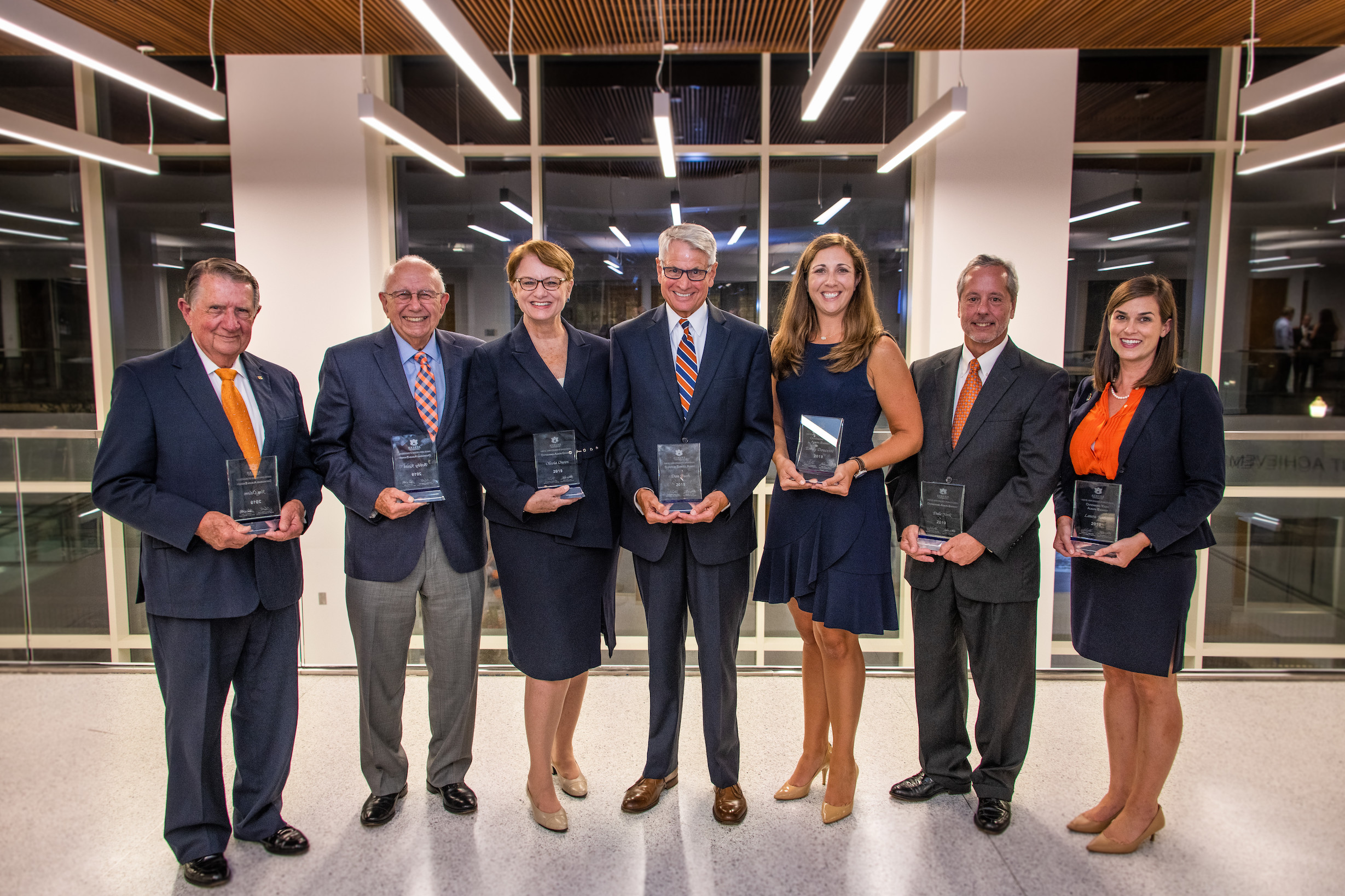 The Award Goes To…

Seven outstanding alumni and ambassadors of the Samuel Ginn College of Engineering were honored Friday, Sept. 13, in the newly constructed Brown-Kopel Engineering Student Achievement Center by the Auburn Alumni Engineering Council for their distinguished professional careers. These alumni include four who were recognized as Distinguished Auburn Engineers, two as Outstanding Young Auburn Engineers and one for Superior Service to the college.

Bobby Keith is a 1963 graduate with a bachelor’s degree in mechanical engineering who is a veteran of the construction industry. In 1970, Keith took a job with Hoar Construction in Birmingham as a field supervisor, rising through the ranks to become chief executive officer. Hoar Construction specializes in healthcare and retail markets, consistently ranking among the country’s most active contractors. As he advanced through the company, it grew to become one of the South’s largest contractors, with revenue growing from $20 million to more than $100 million by the time he retired in 1990. He continues to serve on the board of directors.

He also served as president of the Alabama chapter of Associated Builders and Contractors and received the organization’s Cornerstone Award in 2000.

Prior to his time at Hoar Construction, Keith worked for Northrop Space Laboratories on thermodynamics of heat transfer in missile propulsion systems and, later, helped in the development of the guidance program for the Saturn V rocket system used during the Apollo program. He has been active in construction-related mission work around the world, in addition to civic service on the Hoover School Board and the boards of several hospitals. He established the Keith Family Presidential Endowed Scholarship in the College of Engineering and also serves on the Civil Engineering Advisory Board.

Jim Odom earned his bachelor’s degree in mechanical engineering in 1955 before spending more than 30 years of his career with NASA, contributing to some of the greatest accomplishments in space history. He spent the majority of his career at NASA at the Marshall Space Flight Center, rising through the ranks and culminating in his appointment as director of the Science and Engineering Directorate in 1986. In 1988, he was relocated to NASA headquarters in Washington, D.C., to develop and direct the $24 billion International Space Station Freedom Program — the largest space station program in history.

During the early stages of his NASA career, Odom worked on the development and launches of the nation’s first communication satellites, which included weather satellites, lunar rovers, unmanned space probes and telescopes. As his career progressed, he played key roles in developing the Saturn V launch vehicle and the external tank project on the Space Shuttle, as well as managing the Hubble Space Telescope Project. After retiring from NASA in 1990, Odom was appointed president and CEO of Huntsville engineering firm Applied Research Inc., and then in 1994 began working as a consultant to Science Application International Corporation.

Odom was twice recognized with the Presidential Rank of Meritorious Executive for his work on the space program and also received NASA’s Distinguished Service Medal.

Olivia Owen is a 1977 civil engineering graduate who made a lasting contribution in the petroleum industry. During her distinguished 34-year career with the ExxonMobil Corporation, her exemplary work and exceptional engineering prowess allowed her to rise to leadership roles with diverse assignments and crucial responsibilities.

She began her career as a facilities engineer for oil and gas production in Louisiana and as a reservoir engineer supporting drilling in the Gulf of Mexico. Within the refining and supply department, she managed the purchasing of domestic and international crude oil for Exxon’s U.S. refineries. While living in London, she managed strategic planning and business analysis for Europe and Africa.

In 2004, Owen became the global security manager for ExxonMobil in Dallas. She was responsible for developing and directing ExxonMobil’s security program worldwide. She traveled to over 40 countries, spanning six continents, and reviewed security initiatives with U.S. State Department regional security officers and with representatives from the U.S. Department of Homeland Security and the Department of Defense. Owen became an ExxonMobil Corporate Officer and was named the vice president for safety, security, health and environment in 2009. She retired in 2011.

In addition to her philanthropic support of Auburn Engineering and service to the Auburn Alumni Engineering Council, Owen has also played a pivotal role in the establishment and growth of 100+ Women Strong.

Dale York earned bachelor’s and master’s degrees in civil engineering in 1976 and 1978, respectively, and is the immediate past president and senior principal of LBYD Inc. He has made a permanent impact on the state of Alabama and future generations of engineers. With over 30 years of experience in structural engineering, he completed more than 650 projects throughout the Southeast and is a registered professional engineer in Alabama and 14 other states.

Immediately after graduation, York joined Lane/Bishop/Hodnett Inc. He quickly climbed the ranks of the company and was promoted to an associate five years later. In 1987, York was invited into the firm as a stockholder and principal, and the company was renamed LaneBishopYorkDelahay Inc. He was instrumental in the company’s growth to one of the largest providers of civil and structural engineering services in the Southeast. In 2006, while York was senior principal and president, LBYD Inc. was inducted into the State of Alabama Engineering Hall of Fame.

York served many engineering councils and organizations and held a variety of leadership positions as well. He is a past chairman, vice chairman and treasurer of the Auburn Alumni Engineering Council. In 2004, he was recognized as Engineer of the Year by the American Council of Engineering Companies of Alabama and proclaimed an ACEC fellow in 2010.

Emily Doucette is a three-time Auburn Engineering graduate, earning her bachelor’s, master’s and doctorate in aerospace engineering between 2006 and 2012. Since 2017, she has served as assistant chief scientist of the Air Force Research Laboratory’s Munitions Directorate. In this role, she is responsible for technical program developments, seminars, briefings and distinguished visitors to the Munitions Directorate and leads Technical Sufficiency Review and approval for more than $200 million of the Munitions Directorate’s research portfolio. She previously served from 2012 to 2017 as a research aerospace engineer in the Weapons Navigation Branch of the Air Force Research Laboratory.

During her career, Doucette has produced 11 peer-reviewed publications and 23 reviewed conference proceedings/briefings. She has given back to Auburn by serving on the College of Engineering Young Alumni Council and also as vice chair of the Department of Aerospace Engineering Advisory Council.

Laura Kezar is a 2008 chemical engineering graduate who has spent more than 11 years of her career with Chevron, advancing to the position of lead construction engineer.

Kezar began her career as a facilities engineer in Oklahoma and the Texas Panhandle and then the San Juan Basin. From 2013 to 2015, she was the Black Belt Facilitator for Lean Sigma projects for Deepwater Gulf of Mexico major capital projects.

Beginning in 2015, Kezar was a process engineer for Chevron’s Tigris and Anchor projects, two early-concept, multi-billion dollar Deepwater Gulf of Mexico major capital projects. In this position, Kezar led cross-functional teams of 20 to 30 people in the completion of work plans and decision analysis for project focus decisions critical for concept selection and presented recommendations to senior management, receiving endorsement of $200 million in funding.

Kezar has served Auburn in 100+ Women Strong, the Auburn Alumni Association Board of Directors and the Greater Houston Auburn Club. She is a member of the Department of Chemical Engineering’s Alumni Council and is the former chair of the Auburn Engineering Young Alumni Council.

Dan Bush is a 1972 industrial engineering alumnus who enjoyed a 33-year career with Southern Company and Alabama Power before embarking on a second career as a development officer with the College of Engineering. He began his time with Alabama Power as a co-op student in 1969 before advancing through the ranks as a senior engineer and senior quality assurance engineer and finally working in Alabama Power’s corporate office as a direct account executive and contract analyst.

Earlier this year, Bush retired as a senior major gifts officer after 17 years with the college, where he has built lasting relationships with hundreds of engineering alumni over his career and has facilitated more than $70 million in gifts benefiting Auburn students and faculty. Bush built lifelong relationships with many Auburn alumni which allowed him to present the college’s goals and objectives to them in an atmosphere of trust. This encouraged alumni to explore their areas of interest with him and follow up with gifts for these areas.

Because of his extraordinary ability as a fundraiser, Bush had a significant impact on the college’s ability to implement and support programs that enhanced the Samuel Ginn College of Engineering’s image and ranking.