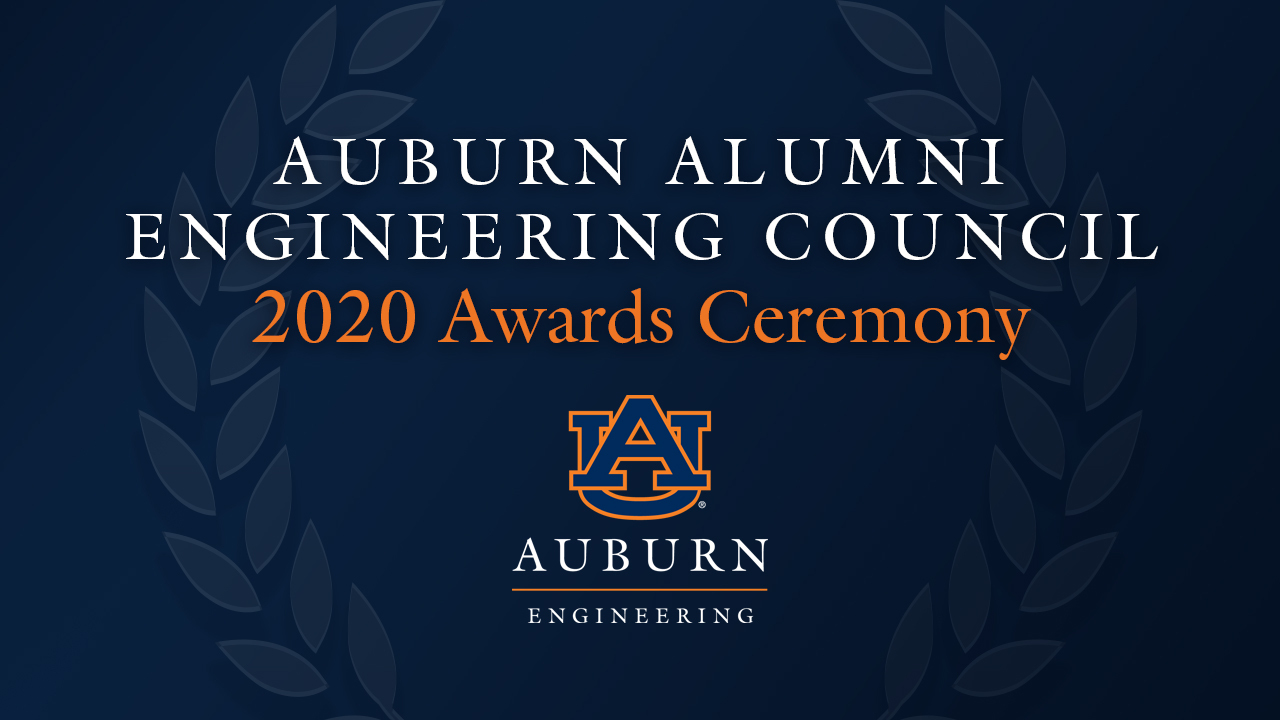 The Award Goes To… 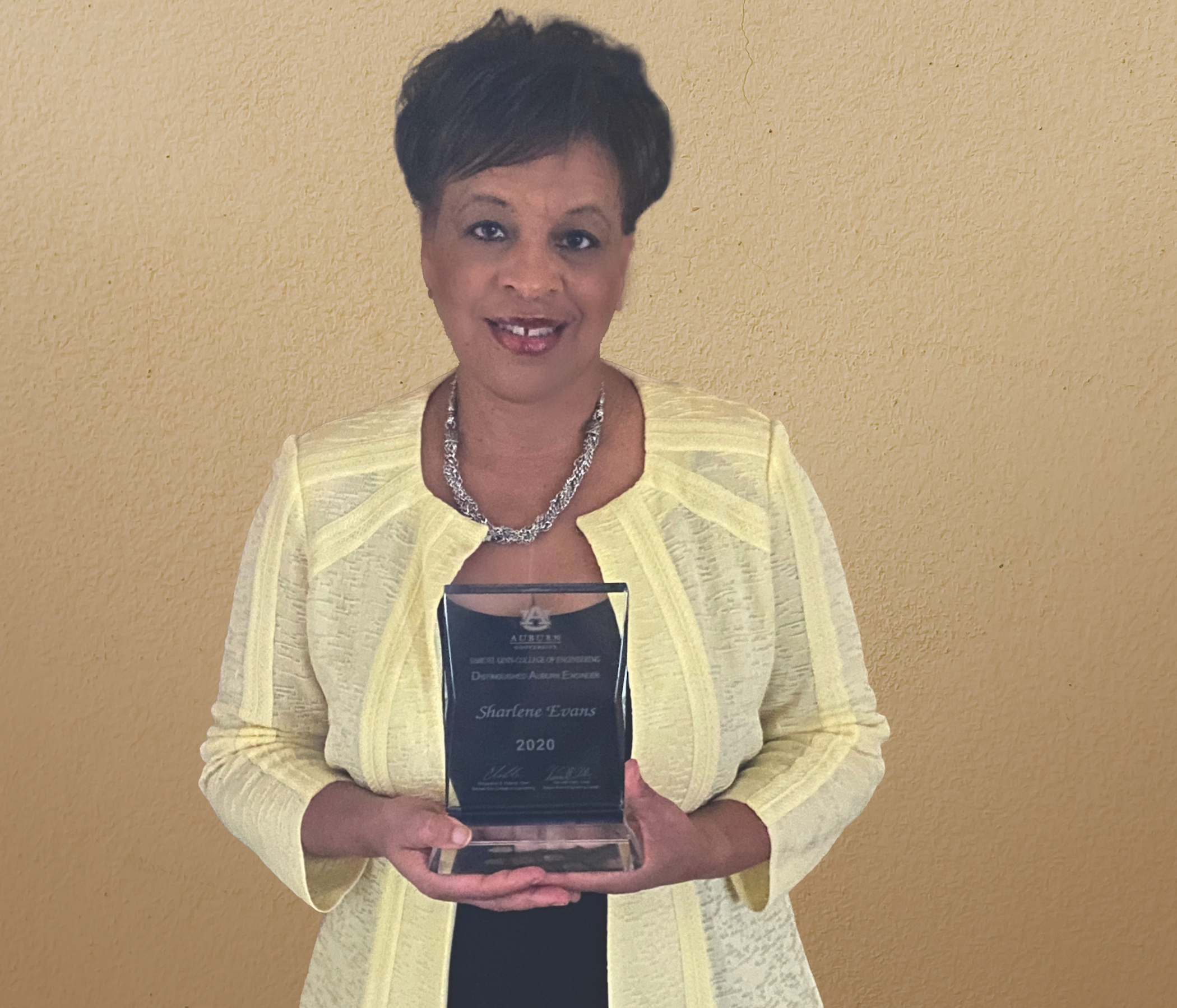 Sharlene Reed Evans graduated from Auburn in 1986 with a bachelor’s degree in industrial engineering. She also earned a master’s in the same discipline from Purdue University in 1990. Evans is currently the Chief People Officer for Myrtle Consulting Group; in this role, she leads the internal people function for the firm and leverages her expertise in organizational strategy, design and change management in support of major business improvement and change initiatives for Myrtle’s clients. She has more than 25 years of global business leadership experience in consulting, and has influenced and shaped some of the world’s most iconic brands, including Kellogg’s, Shell, and Ford.

Prior to her time at Myrtle, Evans worked with SSA & Company, Hitachi Consulting, Celerant Consulting, Ernst & Young, Dell and Eli Lilly and Company.

Evans is a member of the Auburn University Foundation’s Board of Directors, serving on the development committee and as vice chair of the directorship committee. She is also a member of Auburn’s Office of Inclusion and Diversity Alumni Advisory Council and the First Coast Auburn Club. 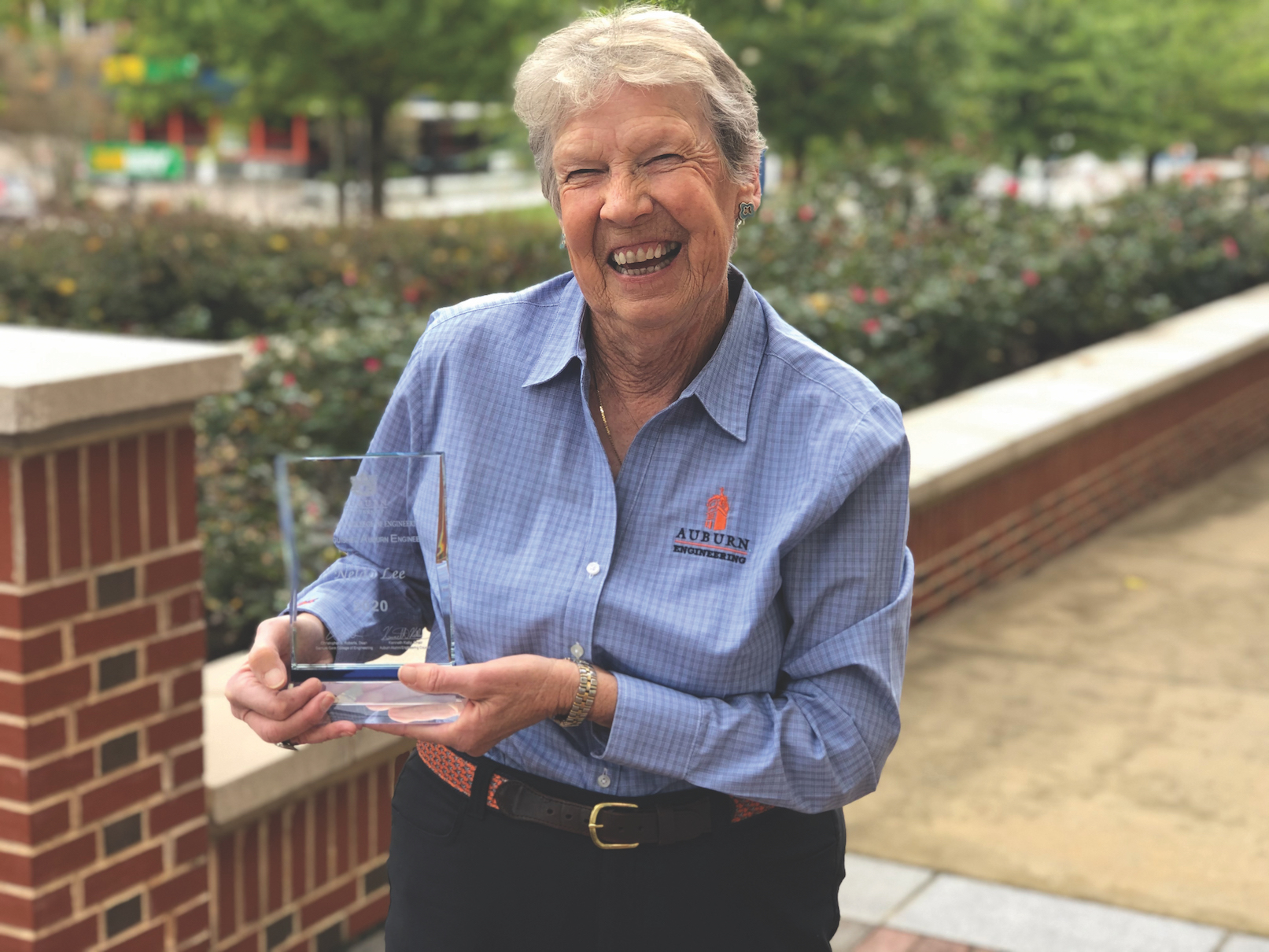 Nelda Lee graduated from Auburn with a bachelor’s degree in aerospace engineering in 1969, and earned a master’s degree in management and human resources development at Webster University in 1999. Lee began her career as an associate engineer at Heritage McDonnell Douglas Corp., where she became the first woman in flight test engineering at the company. She worked her way from associate engineer to a senior manager position in charge of Boeing Test and Evaluation in St Louis. Lee retired from Boeing in 2014 after a distinguished 45-year career.

In addition to her professional achievements, she is a founding member of Auburn Engineering’s 100+ Women Strong Program, where she also serves in an emeritus role on the executive committee, and is an emeritus member on the College of Business Aviation Management Advisory Board. She is also a member of the Auburn University Alumni Marching Band. Lee received the Department of Aerospace Engineering Outstanding Alumna award in 1996 and the Woman of Distinction award from the Auburn Alumni Association in 2014. She was inducted into the State of Alabama Engineering Hall of Fame in 2016 and received the Auburn University Alumni Association’s Lifetime Achievement Award in 2017. She was inducted in the Women in Aviation Pioneers Hall of Fame in 2004. 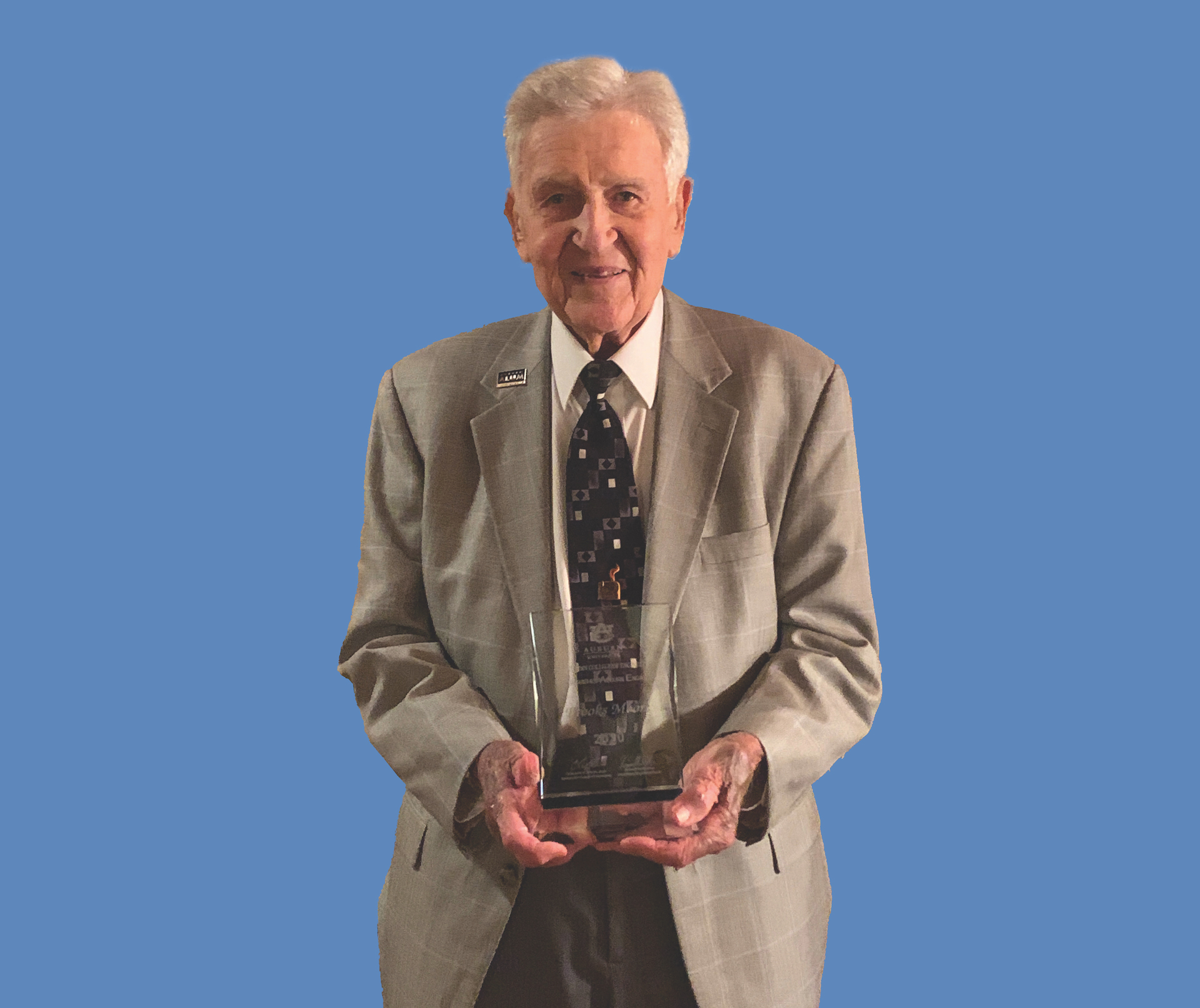 Brooks Moore earned his bachelor’s degree in electrical engineering from Auburn in 1948 and a master’s in the same discipline from Georgia Tech in 1949. Moore was developing underwater mine and torpedo defense systems at the Naval Research Laboratory in Panama City, Florida, when he made the decision to move to Huntsville in 1952.  He was one of the first young American engineers hired to work with Wernher Von Braun and his 120 rocket specialists from Germany. They were brought to Huntsville in 1950 and assigned the task of designing precision guided missiles for the Army.

Moore was transferred with other members of the Von Braun team to Marshall Space Flight Center (MSFC) when it was created in 1960.  His initial position at MSFC was as director of the Guidance and Control Division, and he later became director of the Astrionics Laboratory.  One of the major accomplishments of the team in support of the U.S. Space Program was development of the launch vehicle that put astronauts on the Moon. After the retirement from the government in 1981, Moore continued to support our nation’s space program through his affiliation with several Huntsville aerospace companies.

For his professional achievements, Moore was awarded the NASA Outstanding Leadership Medal, the MSFC Saturn V Award and the MSFC Skylab Achievement Award. He is a 1995 inductee into the Georgia Tech Engineering Hall of Fame and a 1997 inductee into the State of Alabama Engineering Hall of Fame. He also received the 2019 Astronautics Engineer of the Year Award from the National Space Club. Moore has served as a member of the Auburn University Research Advisory Board and as a member of the Auburn Alumni Engineering Council since 1970. 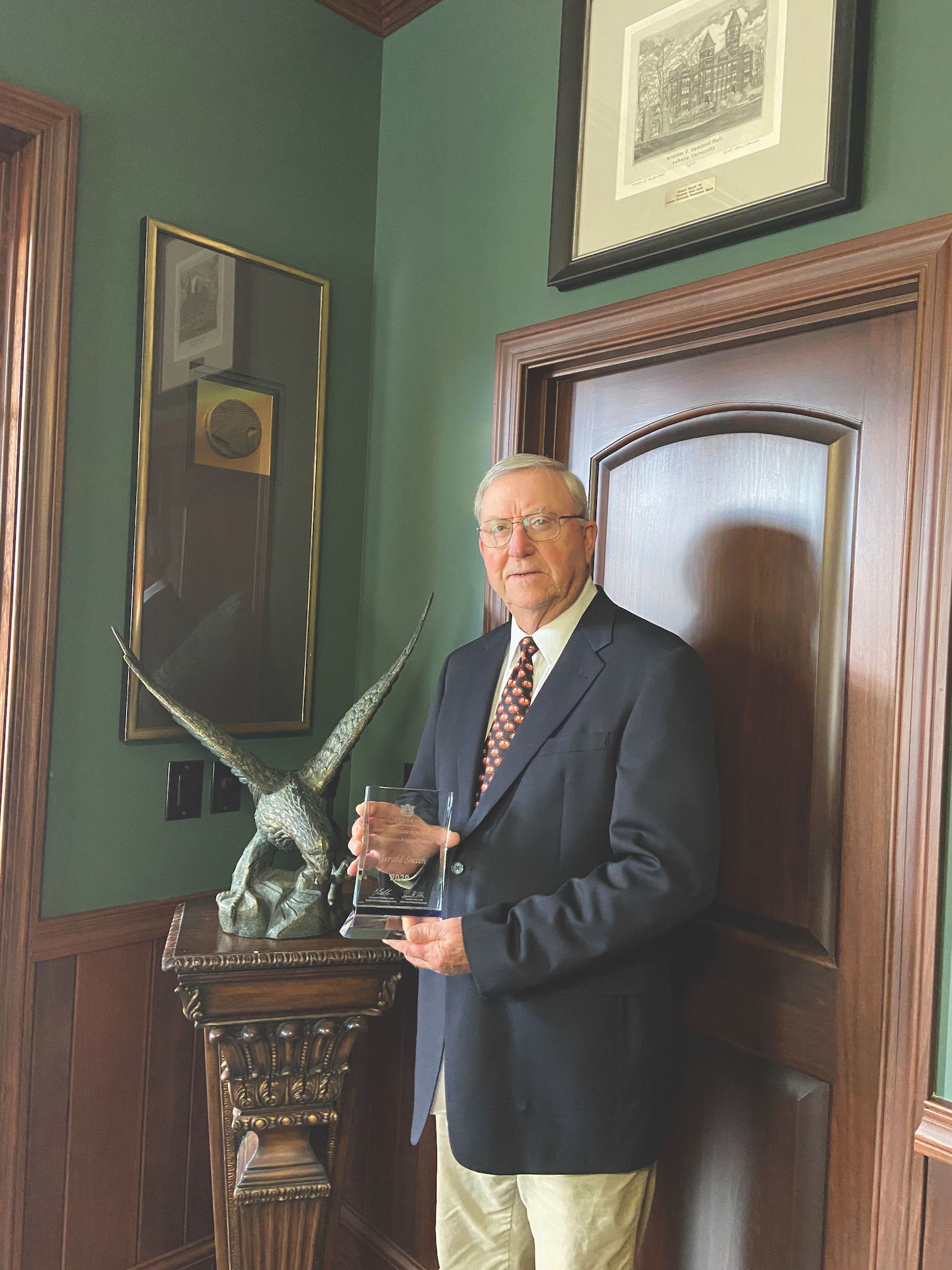 Gerald Smith earned his bachelor’s and master’s degrees in aerospace engineering from Auburn in 1961 and 1971, respectively. Smith retired in 1995 as deputy director of NASA’s John C. Stennis Space Center, and he later served as acting director of research operations at the Georgia Tech Research Institute; president of Thiokol Propulsion, the world’s largest producer of solid rocket motors; and executive director of the National Space Science and Technology Center in Huntsville. 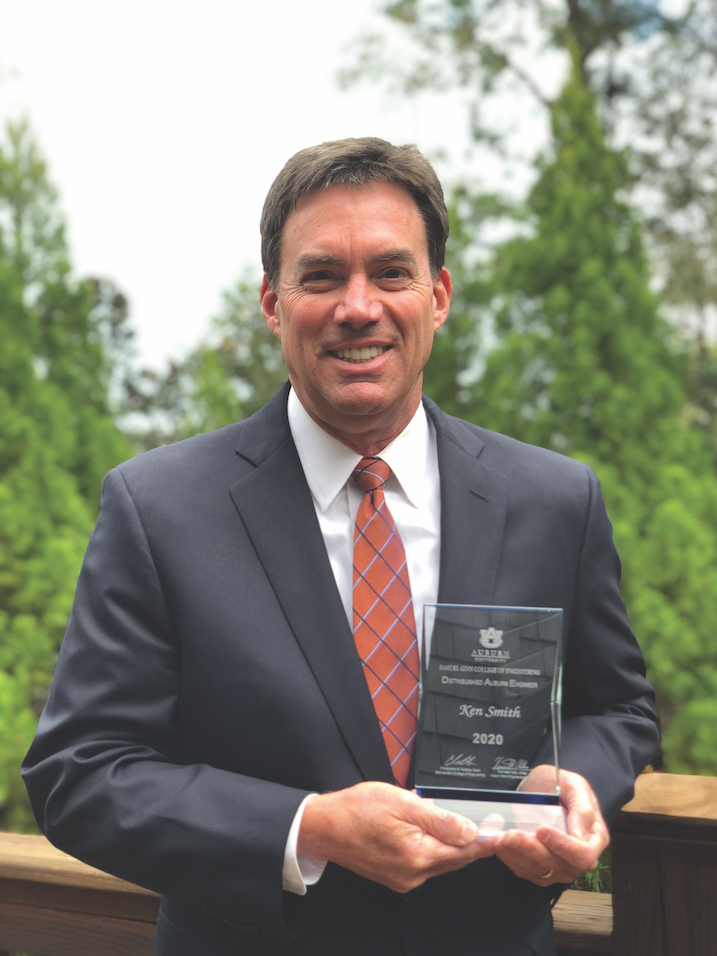 Ken Smith graduated from Auburn University with a bachelor’s degree in civil engineering in 1981. Immediately upon graduation, Ken began working with Alagasco, now Spire Alabama, where he served in engineering, operations, marketing and executive positions. He retired as president of Spire Alabama, Gulf Coast and Mississippi.

In addition to his professional achievements, he is a member of the Auburn Alumni Engineering Council’s Executive Committee and chairs the Academics and Student Experience Committee. He is also a member of the State of Alabama Engineering Hall of Fame board of directors, and a 2018 inductee into the hall.

He and his wife, Lyn, previously established the Ken and Lyn Smith Family Endowed Scholarship in the College of Engineering, and the Brown-Kopel Center’s Recruiting and Scholarship Office Suites are named in their honor. The Smiths are also members of the Engineering Eagles and Ginn societies, as well as the university’s 1856 and Samford societies. 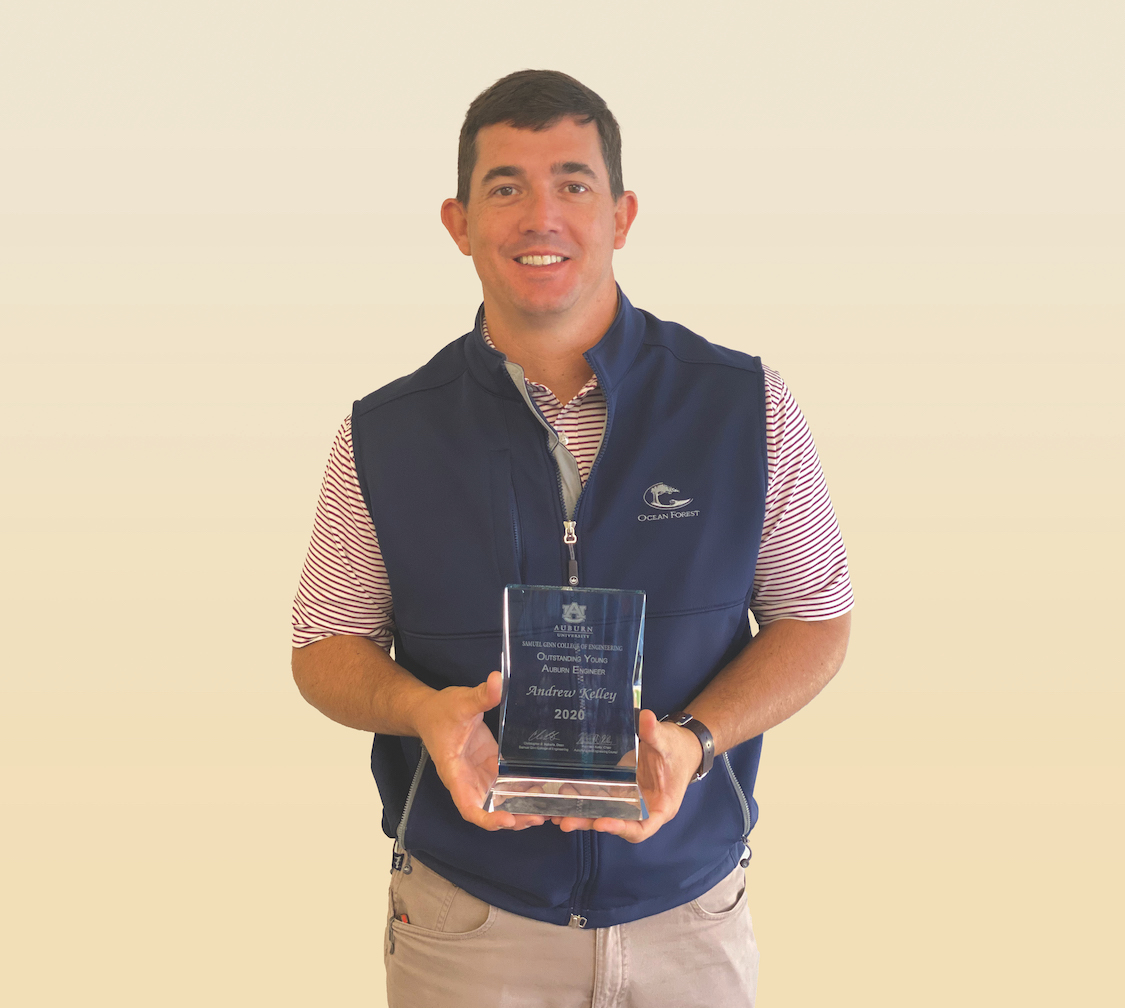 Drew Kelley earned a bachelor’s of civil engineering in 2003 from Auburn University and has 17 years of subsequent experience in the construction industry. He joined Brasfield & Gorrie as an intern and, after graduation, quickly advanced from a project manager to senior project manager to his current position as vice president and division manager of the Atlanta Mixed-Use division. In his current role, Kelley has responsibility for overseeing all business development, preconstruction and project operation functions for the Atlanta Mixed-Use division.

Throughout his career, Kelley has remained engaged with Auburn Engineering by returning to campus to help with recruiting efforts and to give presentations to engineering classes. He has worked on the Atlanta area Auburn Civil Engineering Scholarship Golf Tournament for several years and served as a member of the college’s Young Alumni Council from 2015-19. He is also a lifetime member of the Auburn Alumni Association.

Kelley also gives back to the community by participating in a variety of civic organizations. He has served on committees for the United Way and the Good Samaritan Health Clinic of Cobb County. He has helped raise funds and volunteered for the Atlanta Dream Center, the Rally Foundation, No Longer Bound, Blue Sky Ministries and the Make-a-Wish Foundation. 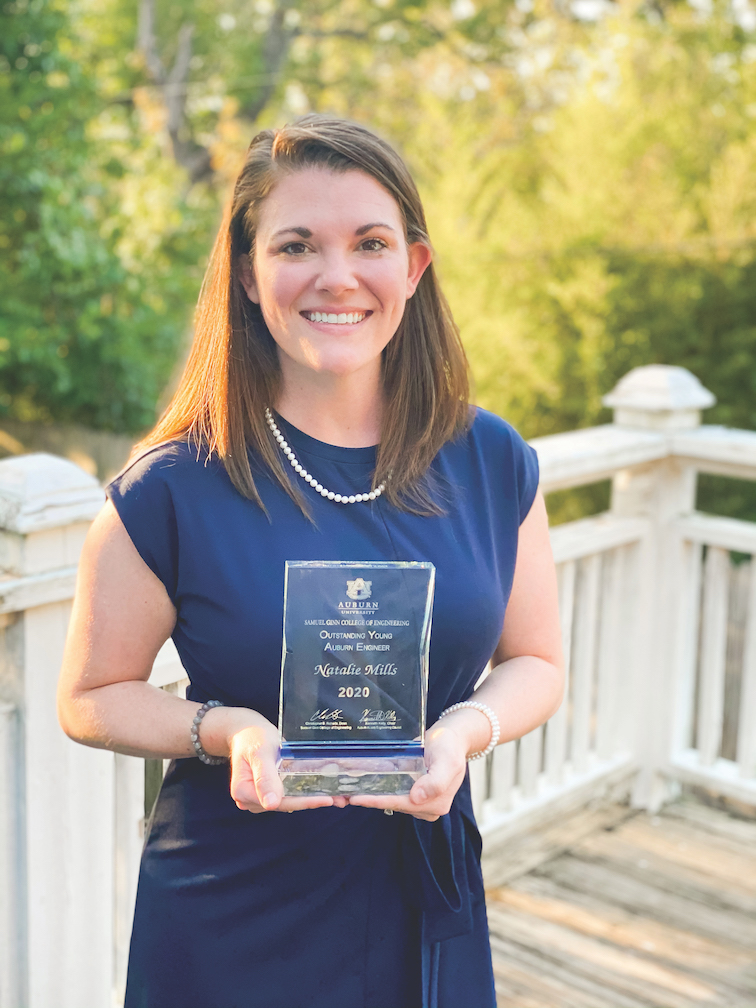 Natalie Mills is a 2010 civil engineering graduate who serves as a regulatory policy analyst for Alabama Power. She also earned a Master of Science in global energy management from the University of Colorado Denver in 2018. Mills joined Southern Company Services in 2010 as a geotechnical engineer, and later served as an environmental assessment engineer where she provided the policy assessment of EPA’s suite of greenhouse gas regulations – the Clean Power Plan – for each of Southern Company’s operating companies. After two years, Mills moved to System Planning, where she performed asset valuations. Nine months later, she transitioned to the fuel forecasting and scenario planning group.

In 2019, Mills moved to her current role as a key member of Alabama Power’s team that worked on the recent filing of a certificate for new power generation.

In addition to her professional success, Mills is the co-chair of the executive committee of the college’s 100+ Women Strong program. She is also a leader in many other organizations within her Birmingham community including Alabama Power’s iCan Girls in Engineering program and Girls Inc. of Central Alabama. 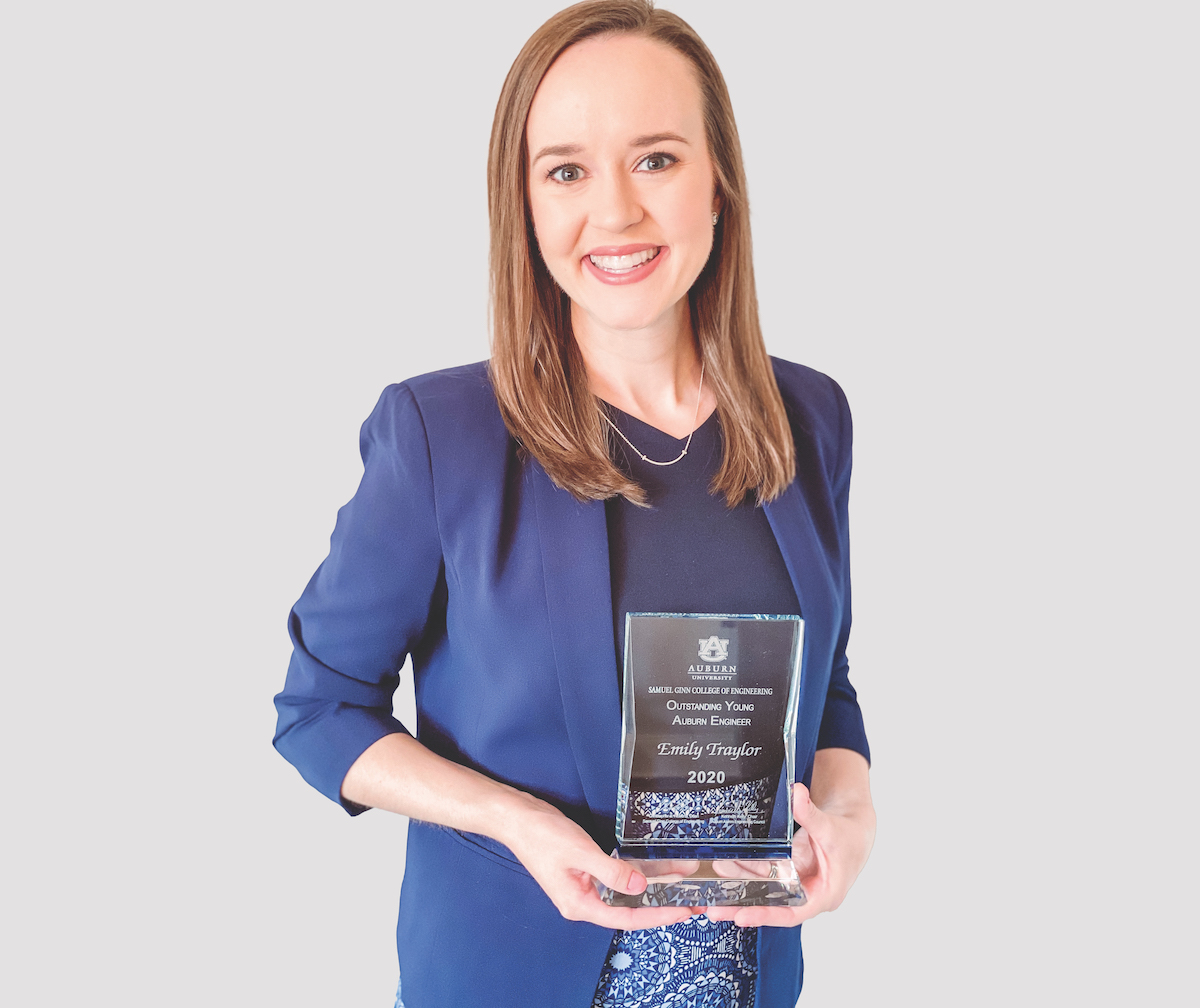 Emily Traylor graduated from Auburn in 2010 with a bachelor’s degree in wireless engineering, software option. She is a graduate student in Auburn University’s Harbert College of Business, working on an executive MBA with a concentration in cybersecurity management.

Traylor currently serves as director of product management and portfolio integration for Fullsteam. In this role, she is responsible for the technical integration and operational success of the Fullsteam payment processing platform across the organization’s portfolio of 29 software company acquisitions. Prior to joining Fullsteam, Traylor worked for Equifax where she served as release engineering leader and deputy director of the Equifax Auburn Technology Center. In this role, Traylor helped establish an Auburn talent incubator for the company, hiring nearly 50 recent graduates and leveraging a pipeline of Auburn Engineering talent for the organization’s technology transformation. Traylor remains a dedicated supporter of Auburn Engineering, serving on the Wireless Engineering Advisory Board, as a member of the college’s 100+ Women Strong program and as the vice chair of the college’s Young Alumni Council. 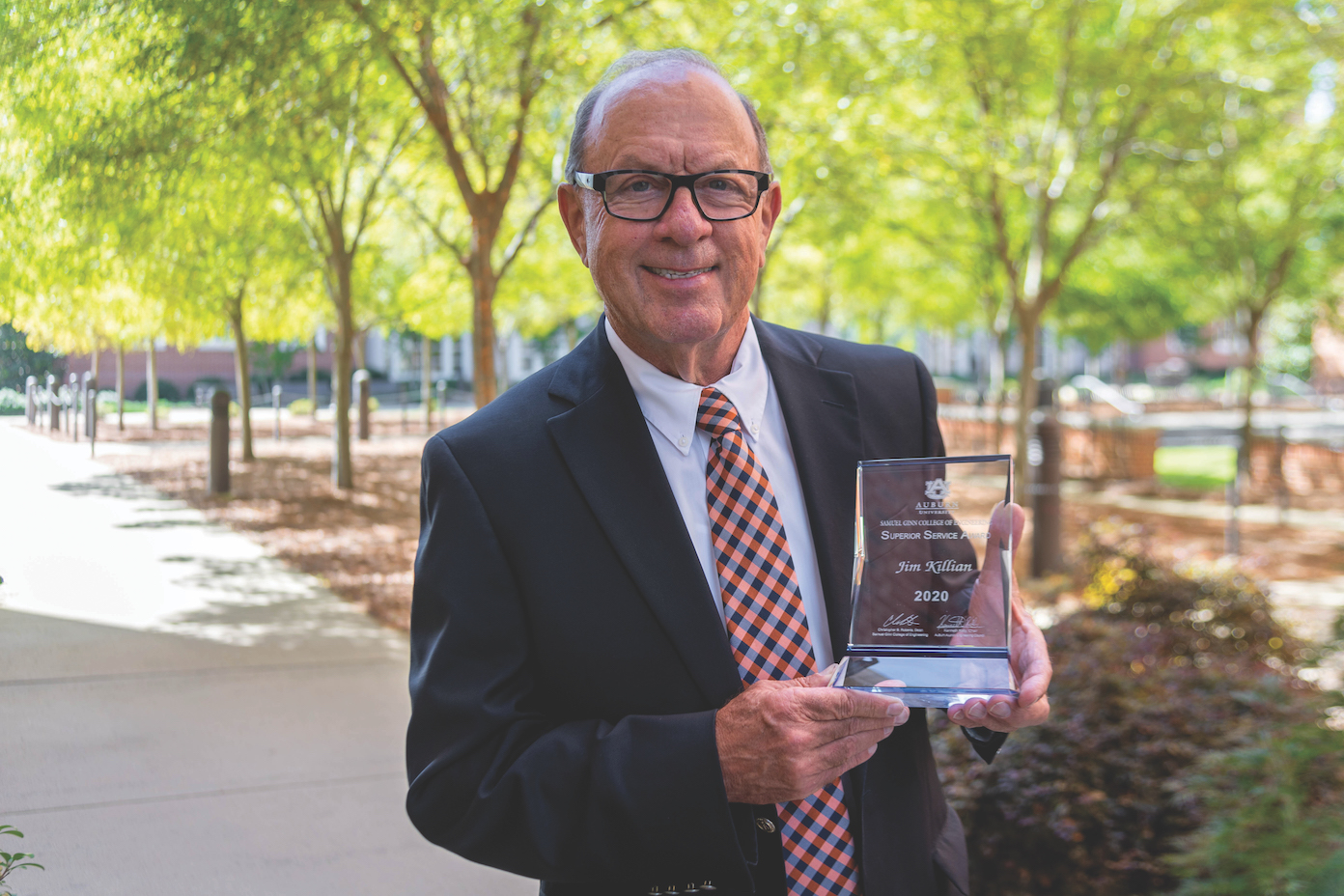 Jim Killian is the retired director of the college’s Office of Communications and Marketing and the secretary emeritus to the Auburn Alumni Engineering Council.

Killian, who earned his journalism degree from Ohio University, served Auburn University for nearly 45 years, including more than 35 years with the Samuel Ginn College of Engineering. As director of the college’s Office of Communications and Marketing, Killian took the college’s brand and promoted it among the best engineering colleges across the nation. As secretary of the Auburn Alumni Engineering Council, Killian became synonymous with the College of Engineering as he interfaced with the most distinguished and accomplished alumni for decades.

In addition to his roles as director of communications and marketing and secretary of the council, Killian served as adviser to the college’s Cupola Engineering Ambassadors for more than 20 years. In that role, he became a mentor and a teacher to the best and brightest students who served to unify and promote the college. To continue that legacy, Killian and his wife, Karen, established a planned gift that will fund a scholarship for a Cupola Engineering Ambassador.