5 minutes with Todd May 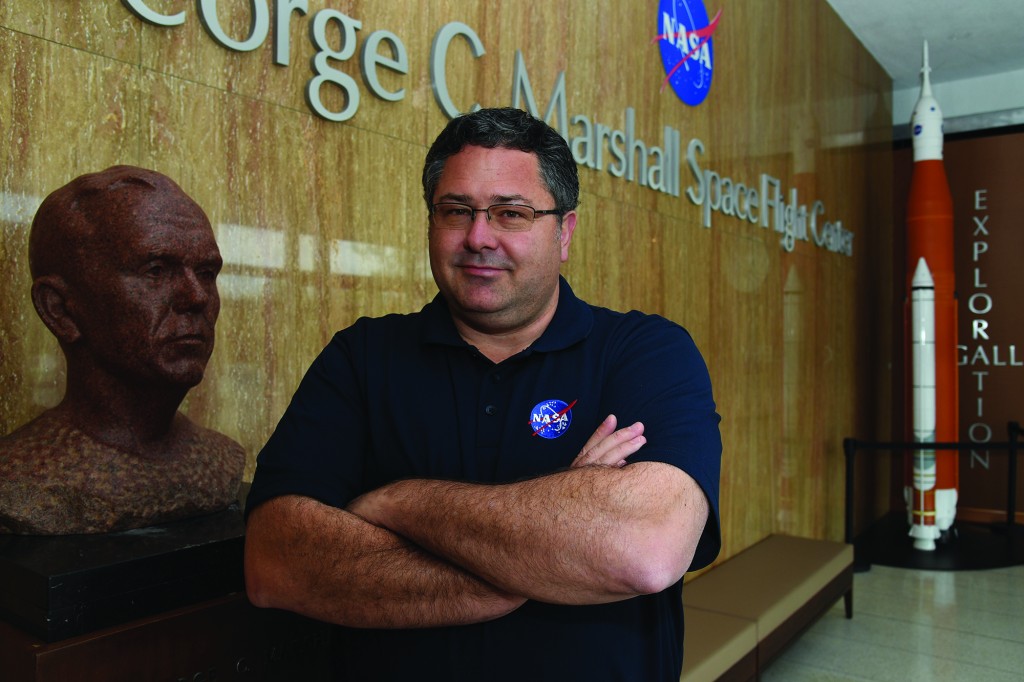 Todd May, director of the Marshall Space Flight Center in Huntsville, Alabama

A veteran NASA program manager, Todd May was named director of the Marshall Space Flight Center in Huntsville, Alabama, in February of this year. As one of the space agency’s largest field installations, the center employs some 6,000 workers in various capacities. May also served as manager of the Space Launch System for a four-year period beginning in 2011. Now in development, it will be the most powerful rocket ever built, able to carry astronauts into deep space missions, including Mars. The Fairhope, Alabama, native began his career at Marshall in 1991 as an engineer in the materials and processes laboratory, the year after he graduated in materials engineering. And, his family is all Auburn. Wife Kelly is an ’89 graduate, Carson will be a senior next year and Madison will be a sophomore. As May says, there are two more kids at home, so two more chances at Auburn.

JK: First things first: did you see “The Martian”?
TM: I did. I liked it because it was a human story, with no implication of aliens. Much of it was technically correct, although the rockets they showed for the rescue missions were much too small . . . Mars requires really big rockets. But, hey, it’s a movie. I actually participated in a panel discussion with the author and the movie producer, which was a lot of fun.

JK: Will we go to Mars on a manned mission?
TM: Yes, and Marshall Space Flight Center is the focus of a lot of this effort. This is where the Space Launch System is based — and it’s a $2 billion effort that is a major part of the center’s $2.5 billion annual appropriation. SLS is a development program that very much fits into Marshall’s mission. We developed the rocket that went to the moon, skylab, the space station, and the shuttle propulsion systems. The soul of Marshall is propulsion, but we do many other things as well.

JK: Could you elaborate?
TM: Well, going back to some of our projects, I have to point to the Hubble space telescope, the Chandra X-ray observatory, the Juno probe to Jupiter, the Deep Impact mission to comet Tempel 1, the flyby of Pluto — a planet that went from its discovery as a speck on a photographic plate to what looked like a blue disk, to what we really know it as now, with incredible imagery by the New Horizons spacecraft. We have also worked on advanced life support systems at Marshall, and, through our Earth observatory satellite program, developed apps that can be used by everyone, everywhere — from Nepal to South Africa — for everything from emergency weather response to data on how the earth is changing due to factors such as deforestation.

JK: What other technologies is Marshall working on today?
TM: We are looking at solutions to problems that exist, or will exist in outer space. What do you do in deep space when things break? When both your primary and secondary assets go, and you’re moving in on Mars, what do you do? One answer is additive manufacturing, or 3-D printing, as it’s also known. Our programs are centered on ‘made in space’ manufacturing, but also on earth-based applications such as printing Inconel super-alloy turbine parts that have to make a transition from cryogenic states to extremely high combustion temperatures. We are also working on out-of-autoclave composites, because we’re going to have to be able to throw a lot of mass out to beat gravity on the way to Mars. We are also working on the next generation of closed life support, to bring oxygen reclamation from 75 percent to 90, and water from 90 to 98 percent.

JK: How do you feel about NASA and Marshall now sharing these kinds of projects with the private sector?
TM: Well, this is nothing new for us. In fact, we have worked for years with prime contractors such as the big aerospace corporations — Boeing, Lockheed, Northrop Grumman and the United Launch Alliance — among others, to design, build, test and deliver components. For example, the Boeing SLS team works under contract to deliver more then $600 million in engineering projects annually. We are now seeing other players that are interacting in new ways, such as SpaceX, and we welcome them to the space community. I think that in many instances you will see NASA leading in early development, with commercialization following in the markets. This only frees up NASA to find the unknown, to push the limits. Really, where SLS is going, there is no market . . . only amazing discoveries and new frontiers of exploration.

JK: Is there a divide in the space community between low Earth orbit efforts and deep space projects?
TM: NASA supports both of these efforts, but there are real differences. Living and working in space is currently only done at low earth orbit — which is in the vicinity of 200 miles away. Think of it as the distance between Auburn and Huntsville. Cislunar between here and the moon represents 10 times the distance and lunar orbits at 250,000 miles, 100 times the distance, or three orders of magnitude. At the same time, it is going to be interesting to see how market forces in space proceed, with an emerging commercial community that will be involved with everything from Space Station resupply missions to space tourism. The development of new technologies will surprise us all — indeed, people often forget that the technologies of the Apollo era did not end when we landed on the moon, but affect us even today in areas you would not think to look, such as the growth of STEM education.

JK: And the future of NASA and Marshall?
TM: In a world that is torn with division and strife, you can look to NASA for something entirely different — to move beyond strife, to reach new heights, to find amazing discoveries. To put human boots on the moon, to find water on Mars, to seeing the outermost planets and stars. To changing the lives of the 700,000 kids who have attended Space Camp in Huntsville. To pushing the limits. To Hubble. To a whole generation of new ideas. Maybe you can boil it down to one picture, and ask yourself — who has not seen or cannot remember the ‘Earthrise’ photo taken from the moon — and not be filled with a sense of awe? A sense of wonder? This is where NASA has taken us, in amazing detail, and Marshall has always been central and vital to the mission.