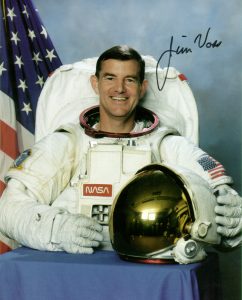 Auburn astronaut Jim Voss, ’72 aerospace engineering, received the American Institute of Aeronautics and Astronautics Haley Space Flight Award for his performance in space flight, space station assembly, leadership in spacecraft design and dedication to space education. Its highest honor, the award was presented at the AIAA SPACE and Astronautics Forum.

A native of Opelika, Alabama, Voss also earned a master’s degree in 1974 from the University of Colorado, which later granted him an honorary doctorate. Voss joined NASA in 1987 and flew on five space missions, including a five-and-a-half month assignment on board the International Space Station. Before his career as an astronaut, he served in the U.S. Army, retiring with the rank of colonel. He is married to Suzan Curry Voss, ’71 mathematics, and they have one daughter.