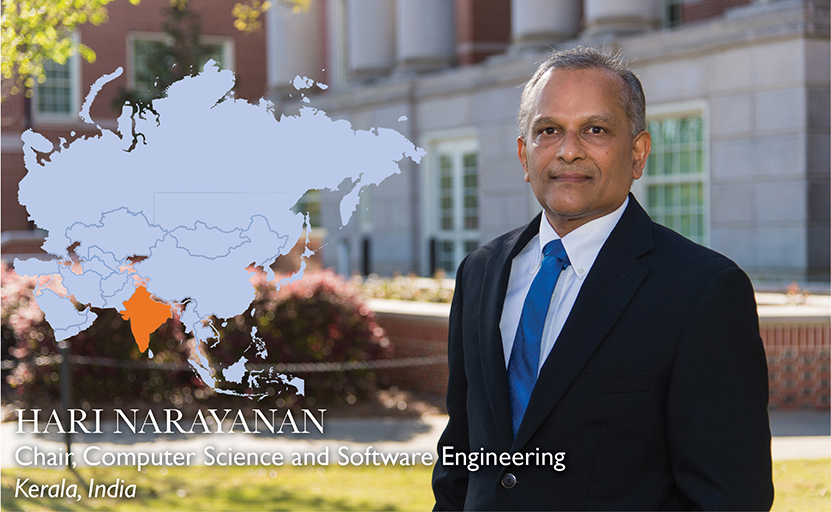 Hari Narayanan smiles as he recounts the vibrant green coconut trees sprawling bountifully throughout Kerala, India, in his childhood.

“The English translation of Kerala is ‘land of the coconut tree,’ so my memories involve eating coconuts and playing near the trees in warm weather,” Narayanan said.

Oak trees, however, encompassed his view after visiting a friend at Auburn in 1996. The small town’s calmness and its renowned engineering program enthralled Narayanan.

Numerous offers from universities were awaiting him, but he was steadfast on sending an application to Auburn for a faculty position.

“During the interview, all the faculty took me out to Momma Goldberg’s for lunch, so right away I was impressed by the department’s kindness,” Narayanan said.

After getting the job, he discovered Auburn students were reflecting his passion for learning even during his 8 a.m. classes.

“All students attended the early class, and that made me love their dedication,” Narayanan said. “You don’t see that everywhere.”

Equalling their dedication, he became chair of the Department of Computer Science and Software Engineering at Auburn University in 2016.

He plans on furthering the department’s success, and ensuring it excels on a national level.

As his department flourishes, so do the electric-pink azaleas sprouting across Narayanan’s beloved campus; enlivened by a Southern heat that rivals the scorching, coconut tree weather of India.