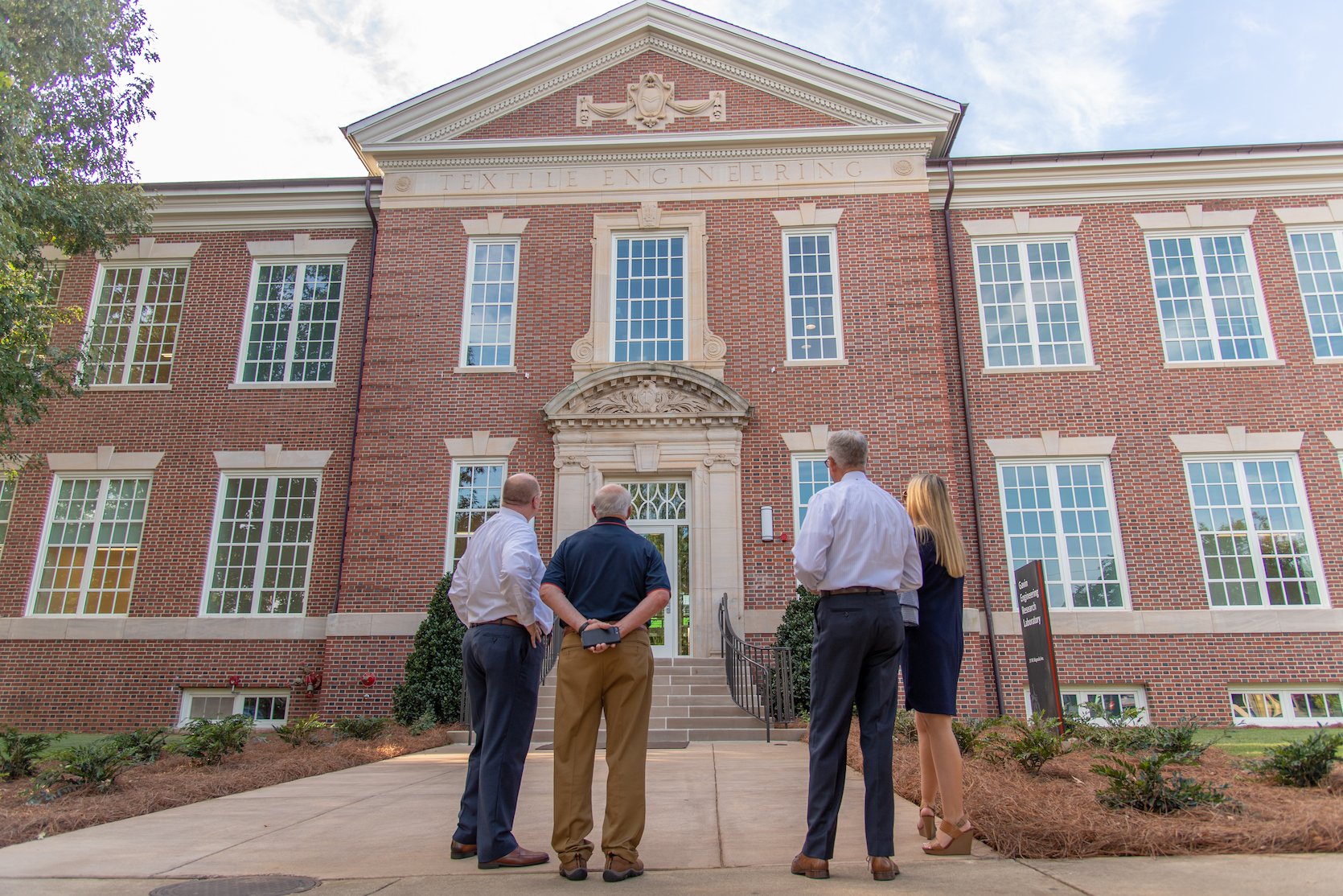 One of Auburn’s most iconic facilities has undergone an $18 million renovation that is building upon the past to help shape the future. The Gavin Engineering Research Laboratory – formerly known as the Textile Building – has been renovated into a state-of-the-art research facility thanks to gifts of $10.5 million made possible by Charles E. Gavin III and his late wife, Carol Ann. This project includes the renovation of the Gavin Laboratory, demolition of the Engineering Shops and L Building and creation of the Carol Ann Gavin Garden. The garden will be completed in spring 2019.

“This facility will serve as a visible reminder, a lasting tribute and a fitting honor to Charles, Carol Ann and the Gavin family’s steadfast support and love of this university,” said Michael A. DeMaioribus, president pro tempore of the Auburn University Board of Trustees, during the building dedication in September.

The building, which was originally constructed in 1929 to prepare future engineers for the textile industry, has served as a vital component to economic development in the region and state for almost a century.

“Charles gave us a great charge, to have this building reformed to serve our region for the next 100 years,” said Christopher B. Roberts, dean of engineering. “Now, we’re doing just that. The promise of this building housing our lead faculty where they can conduct cutting-edge research and prepare our students for careers in the next generation are already taking place.”

An additive manufacturing facility has been incorporated into the building renovation to allow students to gain experience with emerging design and fabrication technology. This has allowed the college to partner with NASA to establish the National Center for Additive Manufacturing Excellence, while also partnering with ASTM International, EWI and MTC to establish the ASTM International Additive Manufacturing Center of Excellence. The renovation has also paved the way for $6 million in grants from the U.S. Department of Commerce’s National Institute of Standards and Technology. 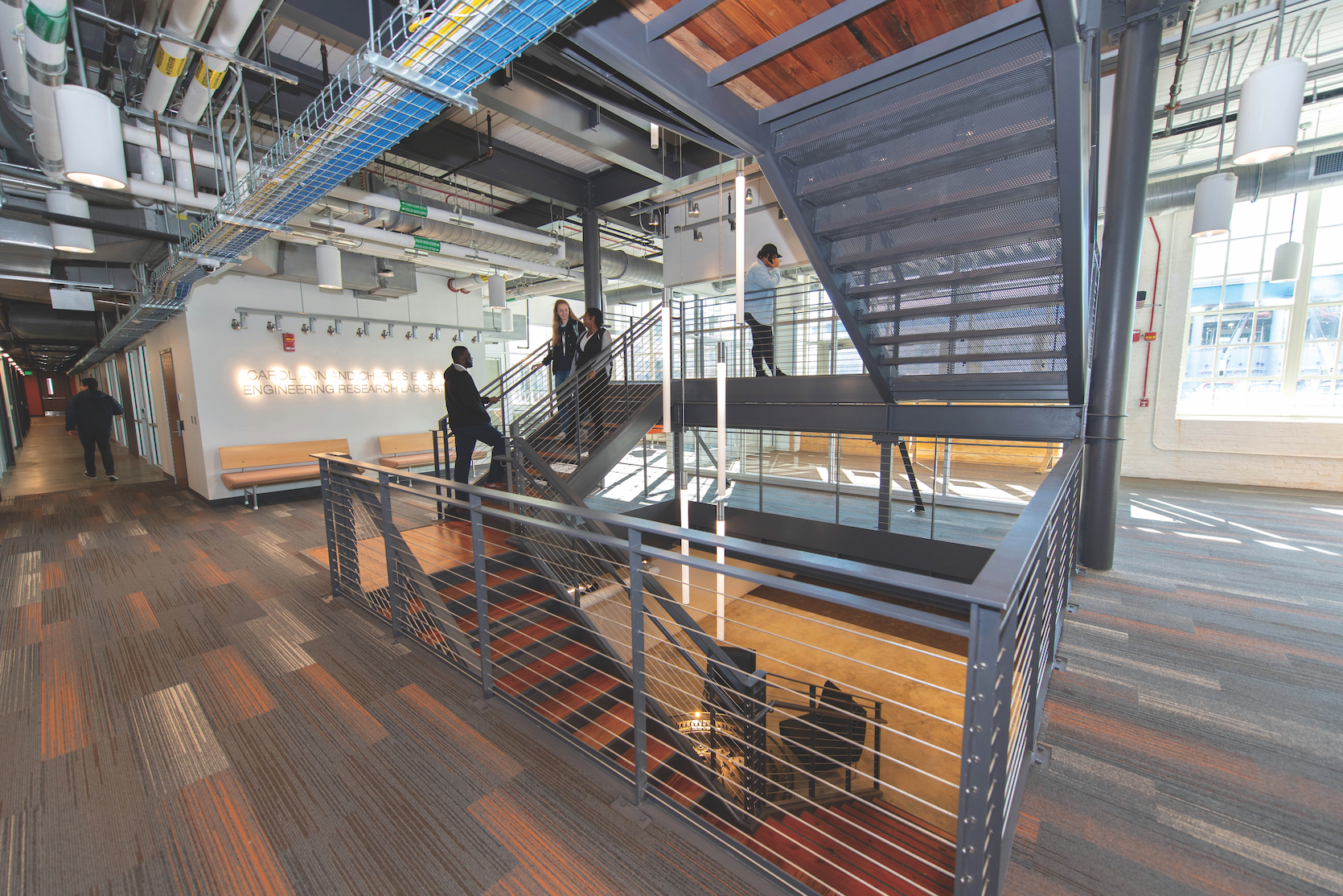 The renovated structure of the Gavin Engineering Research Laboratory incorporates historical elements of the building with contemporary design.

The renovated structure also includes the new Center for Polymer and Advanced Composites to continue the college’s research in this area and to meet industry needs, the Nuclear Power Generations Systems Program, cutting-edge research laboratories and numerous collaborative meeting spaces.

“This facility is going to be an incubator for cutting-edge research that is going to help us prepare our students to be the leaders of the future, while also bringing research opportunities to Auburn,” said Maria Auad, director of the Center for Polymer and Advanced Composites.

The south entrance of the Gavin Engineering Research Laboratory will also be renovated to allow students more convenient entry to the building when coming from the heart of campus, while also providing accessibility to the Brown-Kopel Engineering Student Achievement Center, which is currently under construction. 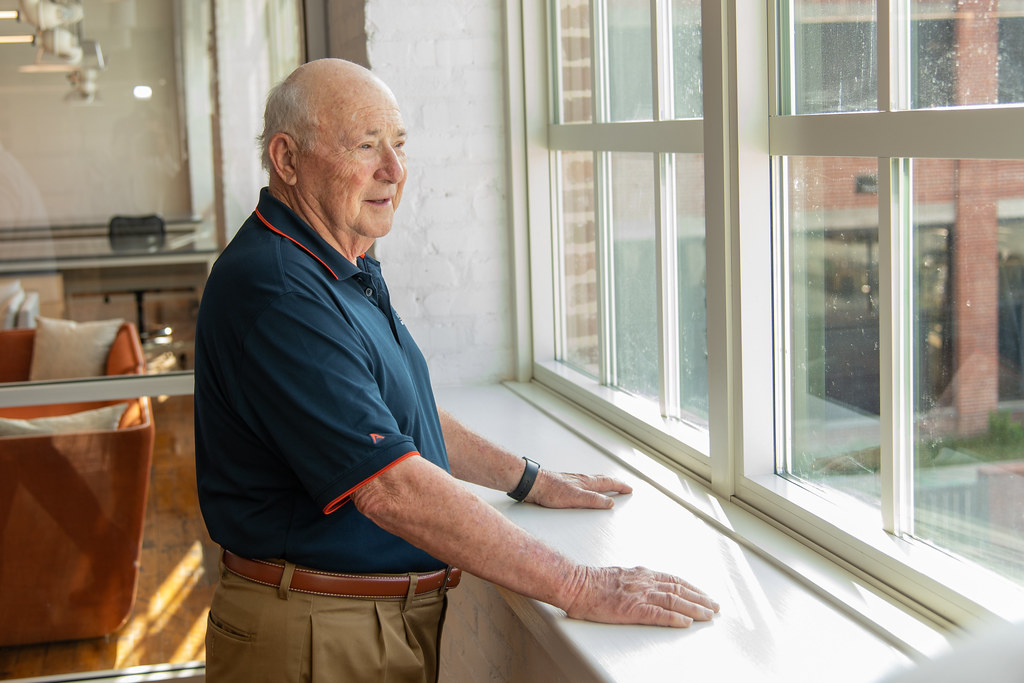 Charles Gavin, ’59 textile management, has had a hugely successful career in both the textile and surfactant chemical industries. He founded MFG Chemical Inc. in 1981 in Dalton, Georgia, to serve as a supplier to the carpet industry. Highly successful today, MFG offers custom and toll chemical manufacturing to a wide variety of markets, including oil fields, water treatment, paper and mining. What began as a husband-wife team now includes three plants and a distribution center, serving a broad segment of the chemical industry’s Fortune 100 companies and major international clients. Gavin served as board chairman, and he returned as CEO following the death of his son, Chuck, who previously served in that role. Gavin sold the firm in 2017. 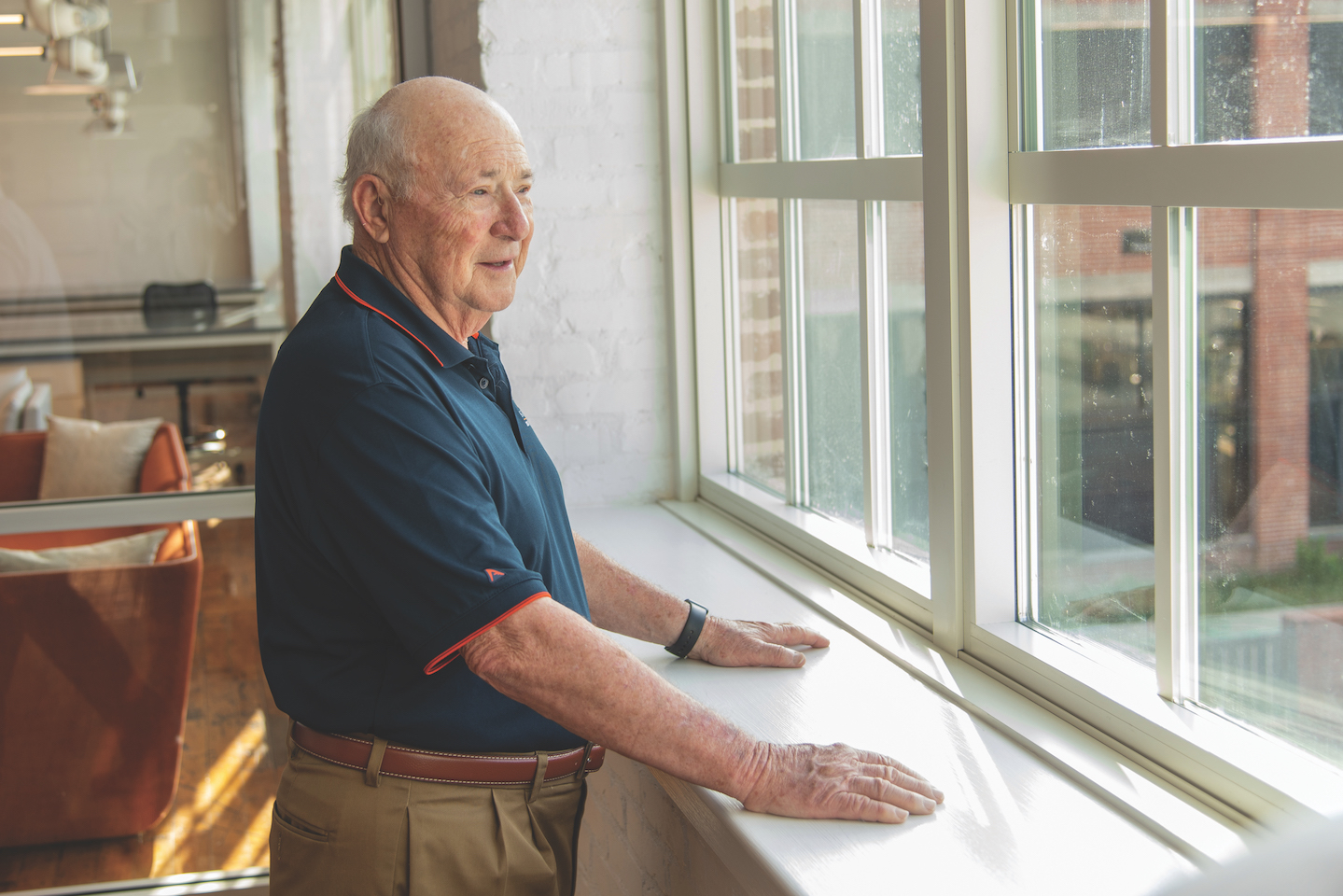 Charles Gavin, ’59 textile management, takes a look out the window of the newly renovated Gavin Engineering Research Laboratory overlooking the Carol Ann Gavin Garden, which is currently under construction.

In addition to his Auburn education, Gavin also obtained an executive MBA from the University of North Carolina. He has been a member of the American Association of Textile Chemists and Colorists for more than 50 years, having served as president of the AATCC and 10 years as treasurer. Upon his retirement, he was named emeritus treasurer for both the association and its foundation, of which he was instrumental in forming. He received the Harold C. Chapin Award in 2002 for service to the industry.

Gavin and his late wife, Carol Ann, have made numerous contributions to Auburn Engineering, strongly supporting engineering education and work force development. In addition to the numerous scholarships he has provided through the AATCC and its foundation, he also created an endowed professorship in chemical engineering and an endowed doctoral fellowship program. The Gavins have also supported Auburn basketball through gifts toward the practice facility in Auburn Arena with the team conference room being named in her honor as the Carol Ann Gavin Conference Room. Outside of Auburn, the Gavins have been generous philanthropists to numerous organizations and institutions, including Harvest Outreach, Hamilton Medical Center, RossWoods Adult Day Services and Vanderbilt University Medical Center where they established the Carol Ann Gavin Directorship of Trauma and Surgical Critical Care.

Gavin was awarded the Auburn Alumni Association’s Lifetime Achievement Award in 2018, was inducted into the State of Alabama Engineering Hall of Fame in 2016, was named as a Distinguished Auburn Engineer 2014 and was named as the Outstanding Textile Alumnus in 2003. He is a member of the Auburn Alumni Engineering Council, as well as Engineering’s Eagles and Keystone societies and the President’s Circle of the university’s 1856 Society.

“Charles is truly the best example of an Auburn man,” said Auburn University President Steven Leath. “He exemplifies the Auburn creed. He lives the creed.” 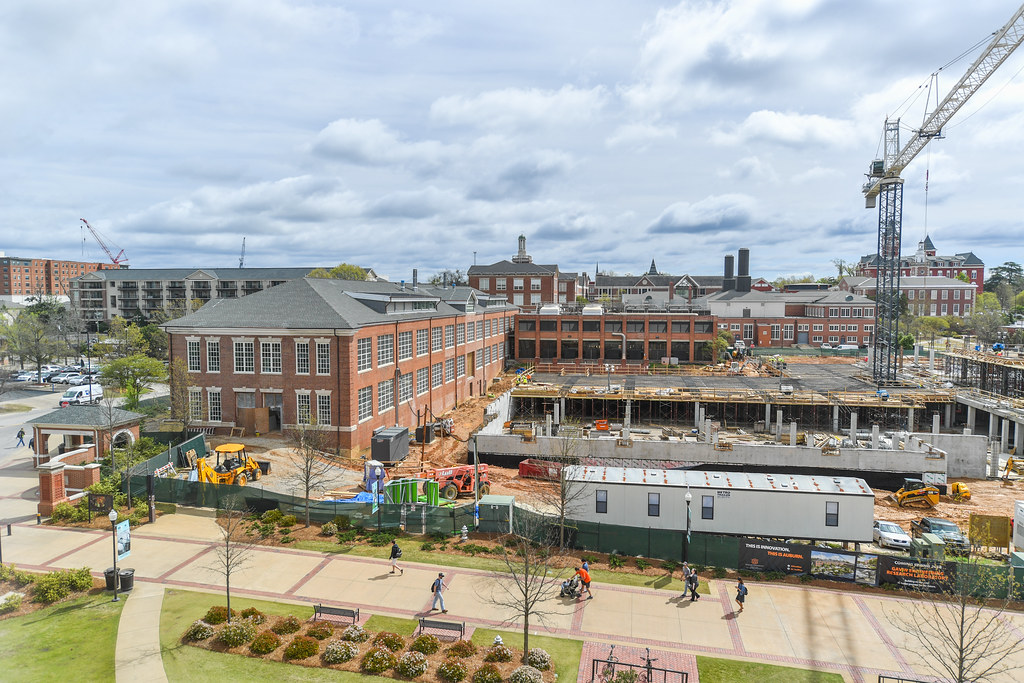