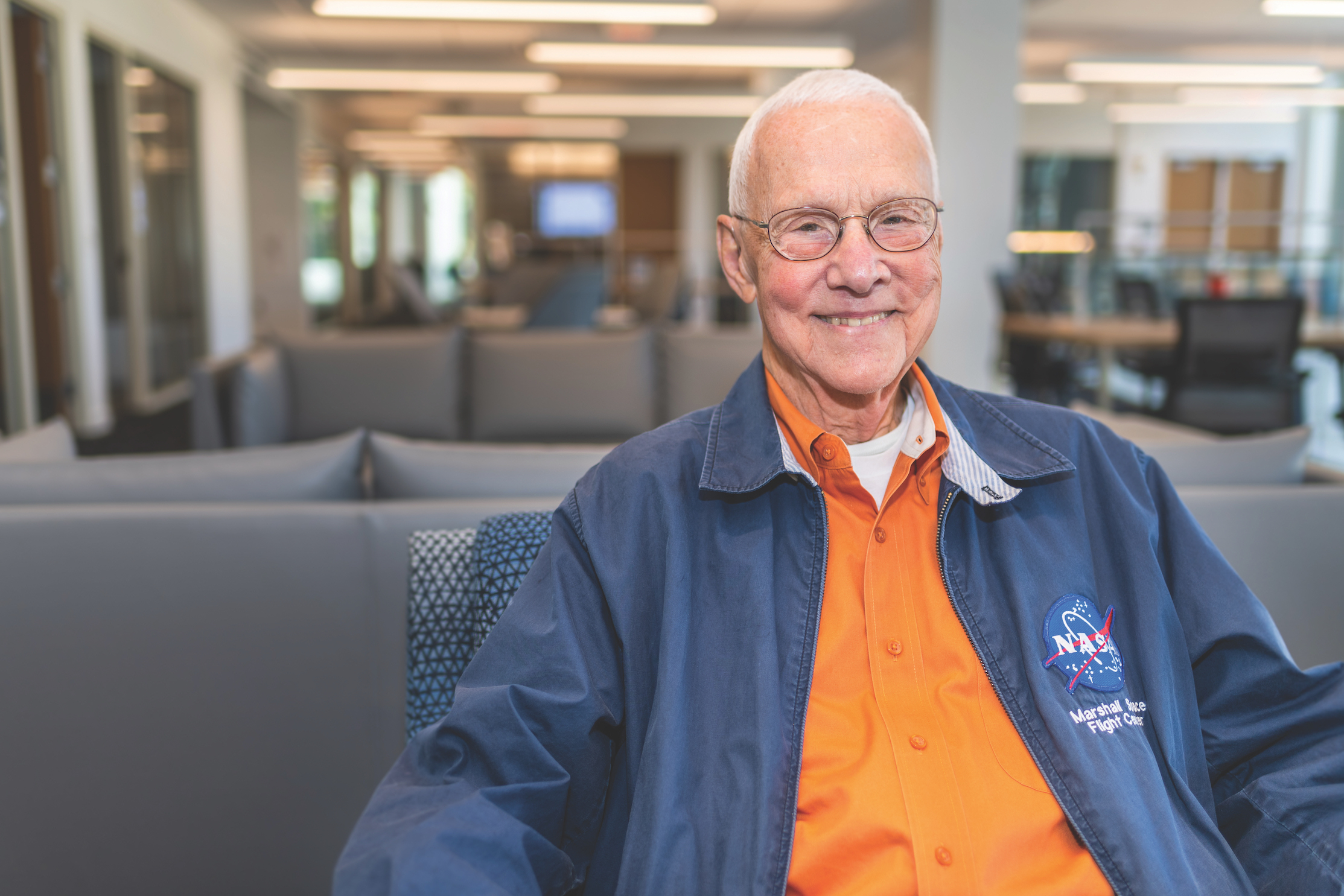 These words echoed around the world as Jack King, Kennedy Space Center’s chief of public information, narrated the events of July 16, 1969. Millions watched from their television screens, and others in person, as the Saturn V rocket took flight to carry Apollo 11 astronauts to the moon.

Jim Thomas and his wife-to-be Pat observed from a unique perspective as the spacecraft slowly lifted from Launch Pad 39A. He worked for seven years with Wernher von Braun’s rocket team to help give it the ability to do just that.

Both arrived at Kennedy Space Center a week before the launch of Apollo 11. Pat was there as part of NASA Marshall Space Flight Center’s Public Affairs Office, interfacing with visiting press and dignitaries at Cape Canaveral’s Convention Center. Jim was one of several engineers in the Saturn V’s Engine Program Office selected to support the launch.

Jim earned his bachelor’s degree in engineering at Auburn in June 1958, and upon graduation he began a 61-year career as a rocket propulsion engineer that is continuing to this day. Jim has been a Registered Professional Engineer in Alabama since 1965, and has received numerous awards including NASA’s Silver Snoopy, Director’s Commendation, Silver Achievement Medal and Exceptional Service Medal for his services to NASA.

“When we graduated from Auburn in the ’50s we were practical, hands-on engineers, but I didn’t know I was going to work on anything after graduation because in 1958 there were basically no jobs out there,” he said. “The economy was really bad. I had fraternity brothers who graduated in ’56 with 10 to 12 offers. In ’58, you were doing well to get one job offer.”

Though he had just graduated from Auburn, Jim already had engineering work experience under his belt. Following high school, he had spent almost two years volunteering in the Navy during the Korean War.

An Auburn engineer got a hold of his resume, leading Jim to his first assignment with Thiokol Chemical Corp. in Brigham City, Utah, working to design and test the first stage of the Air Force’s Minuteman intercontinental ballistic missile. A year later, he moved to Edwards Air Force Base to support Boeing Aerospace in learning how to launch the Minuteman out of a silo – a big, complex hole in the ground. Following successful completion of the Silo Test Program, Jim was transferred to Boeing in Seattle to continue testing the Minuteman ballistic missile systems.

In 1962, soon after President John F. Kennedy made his declaration to send Americans to the moon before the end of the decade, Jim joined the Saturn V team at newly established NASA Marshall Space Flight Center in Huntsville, Alabama, to fulfill Kennedy’s goal. He supported the development of the Saturn V’s J-2 and RL10 liquid-fuel cryogenic rocket engines. Finally, it was time for NASA to shoot for the moon with Apollo 11.

“The week of the launch I spent most of my time responding to technical questions from the visiting dignitaries in the Vehicle Assembly Building area and the adjacent press viewing site,” Jim said. “That is three miles west of Launch Pad 39A – right next to the Launch Control Center and the closest people can get to the launch for safety. Pat and I witnessed the launch from the VIP press site.”

Jim recalls watching the large launch countdown clock in front of the viewing site that could be seen by all in the area. It started counting down the launch days before lift-off.

“Apollo 11 lifted off at 9:32 a.m. on July 16, 1969. By midnight before, there was already a large crowd at the viewing site. By daybreak, standing room was limited, and by 7 a.m., the viewing site was overflowing with dignitaries and press from all over the world. The crowd noise was loud,” he said. “As we faced east toward Pad 39A, looking into the sun and watching the clock click off the minutes and finally get down to the 10-second mark, the crowd noise became dead silence.

“What came next was almost overpowering and not expected by most of the viewers. First, there was the pressure wave from the flow of 450 million gallons of water into the exhaust ducts to cool them from the 5,000 degree Fahrenheit exhaust flame produced by the five F-1 engines. Next was the Saturn V’s ignition pressure wave and finally, the noise from the rocket engines reaching the viewing site three miles away. It was awesome, thrilling and exciting, to say the least, to witness history being made by the United States Space Program in its mission to put humans on another body in our solar system. And, a little more astonishing was the ground literally vibrated and shook under our feet.”

Several days after the launch, Jim returned to Huntsville to resume his normal work duties, all the while thinking of the monumental event that was still in progress up in space, 238,900 miles away. The Saturn V engineers spent as much time as they could keeping track of Apollo 11’s mission, tuning into NASA’s television transmissions each day. The astronauts landed on the moon on July 20, with Neil Armstrong and Buzz Aldrin spending 21 hours and 36 minutes on the lunar surface. Some 530 million viewers worldwide watched the lunar landing and moonwalk on their TVs, including Jim and his fellow Saturn V engineers observing intently from Huntsville.

On July 24, the astronauts successfully returned home, splashing down in the Pacific Ocean near Hawaii. Their mission was complete, and it was on to the next.

In 1970, Jim moved off the Apollo program and onto the Space Shuttle program, where he would spend 22 years helping to design and develop the Space Shuttle Launch Vehicle. He retired from NASA in 1989; however, he has continued working as a contractor all these years. Since 2005, Jim has been focused on the Orion Crew Module’s Launch Abort System, designed to safely remove the crew module from NASA’s Space Launch System rocket in the event of a failure.

On July 16, 2019, the Thomases again stood together, this time not looking at a countdown clock or up at the sky, but at the celebration all around them in downtown Huntsville. Once again, the citizens of Huntsville and Madison County were dancing in the streets around the courthouse square as they did in 1969.

“Standing at the cape, to celebrating again 50 years later, it kind of puts a big lump in your throat when you think about it, and all the successes we had with the Apollo program just cannot be overstated,” he said.