A Centennial of Auburn Engineering: Modern Leadership for the Modern Age of Engineering 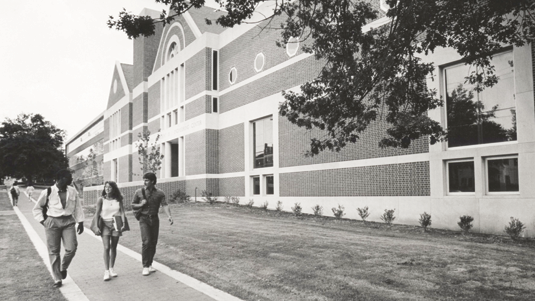 This article has been adapted from chapters of a manuscript by alum Art Slotkin, ’68 aerospace, detailing the history of Auburn Engineering, from its founding in 1869 to its establishment as a college in 1908 and into the modern age of engineering that we know today.

In the decades that built up to the turn of the century, the College of Engineering was administered by a progression of leaders who aligned its programs with the changing face of technology, teaching methods, research needs and career opportunities.

Lynn Weaver, a nuclear engineer recruited from Georgia Tech, served from 1982-87, with then-president James E. Martin remarking that Weaver had developed the foundation of a strong engineering college and contributed significantly to Auburn’s development as a research university.

Weaver’s five-year tenure is remembered as a time of rebuilding and change of direction for the college. By the time he resigned to become president of the Florida Institute of Technology in 1987, Auburn Engineering had nearly doubled postgraduate enrollments to
11 percent of the student body.

Weaver’s tenure was also marked by the creation of a new academic program that recognized the growing importance of computer technology. Before that time, Auburn’s first computer courses were administered by a committee made up of representatives from many departments.

That changed during the early ’80s, when administrators determined that a new academic program was needed and that it should reside in the College of Engineering. Dave Irwin, who was electrical engineering department head at the time, was asked to create the program.

“When we launched the new program, students signed on in droves,” says Irwin. “We were teaching classes at 7 a.m. to meet demand. The program was spun off into a new department, computer science and engineering, in 1984.”

Following Weaver’s departure, M. Dayne Aldridge was named interim dean. Aldridge was already recognized for a solid record of engineering, academic and administrative experience, and had served as part of the dean’s office for three years.

As assistant dean for research, he coordinated the college’s research programs, which totaled $10.6 million in 1987 — double the amount when he assumed the post in 1984. As associate dean for cross-disciplinary studies, he built on his experience as director of the Thomas Walter Center for Technology Management, which built bridges between engineering and business.

Aldridge’s tenure was followed by the appointment of William F. Walker, chairman of the department of mechanical engineering and materials science at Rice University in Houston, as Auburn’s ninth dean of engineering. His timing was propitious. Engineering and pre-engineering enrollment increased in the fall of 1988 for the first time in four years, and the number of women studying engineering grew to 20 percent, compared to about 15 percent of engineering freshmen nationally.

Walker’s tenure as dean was marked by a great deal of effort sustaining the growth of Auburn’s female engineering enrollments, as well as building new inroads to the enhancement of minority engineering programs.

“The move was a good one, and put Auburn in a leadership position in the area of software engineering,” says Irwin.

They were among several programs that began their evolution under Weaver, and continued to grow during Walker’s years as dean, as he led the college through the ’90s. Walker would later move to the provost’s office and eventually to the institution’s presidency.