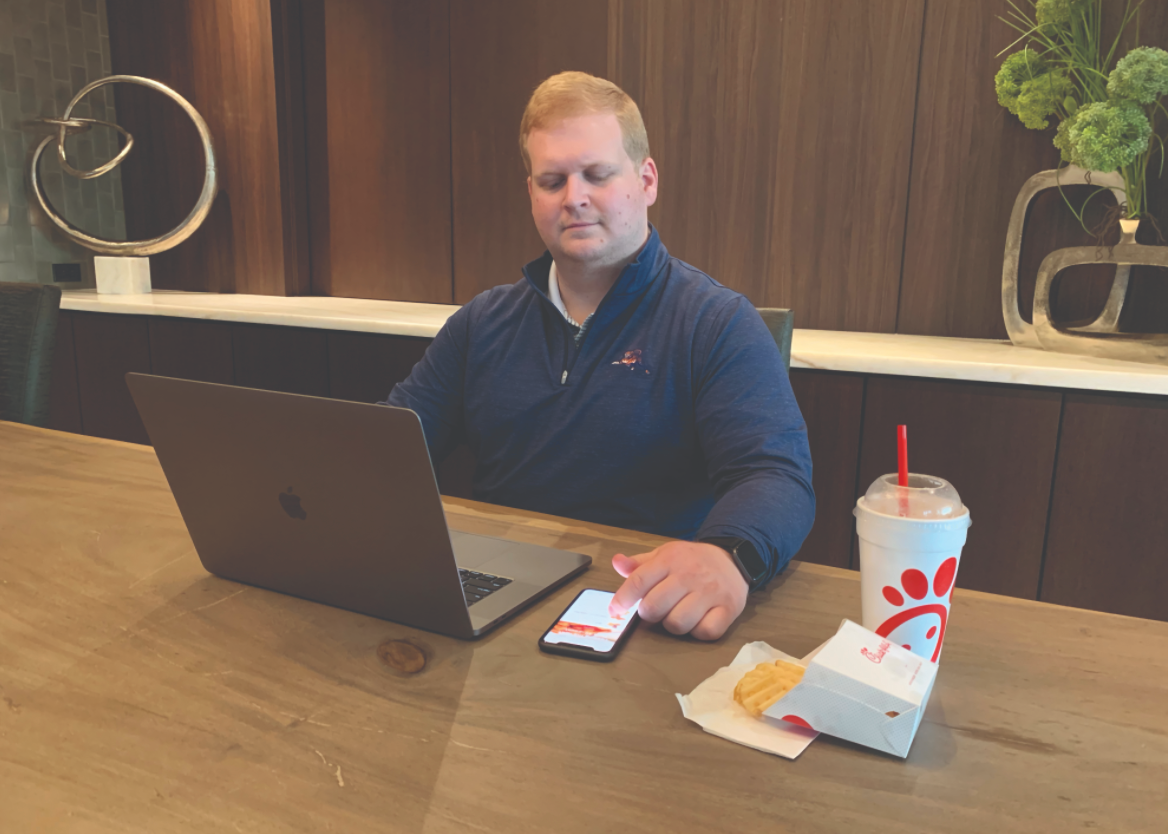 I had a good friend who I grew up with in Nashville who kind of recruited me to Auburn. I knew that I wanted to go to a large, public university in the South and that Auburn, with a strong football program and top-notch academics, felt like a good fit. I knew it had a great College of Engineering, but when I checked it out on the Cupola tour — there was just something different about Auburn. I was interested in building software and writing code, but what drew me to the wireless program was thinking about what skills could help me stand out in the market after graduation.

Word on the street is that we have you to thank for the great Chick-fil-A app?

Well, the earliest iterations of the Chick-fil-A app technically started quite a while back – as early as 2013. Around the same time, we had a program that was known as “A-List,” which was a grassroots loyalty program that allowed store operators to recognize and reward their most loyal customers. As the program grew, our leadership wanted to expand its reach to reward all customers – more than we could ever do in the existing format. The result of that expansion is what we now know as the Chick-fil-A One loyalty program. In June 2016, we did a major promotional launch of the new program, and that was a really big deal. The promotion offered new members a free Chick-fil-A chicken sandwich for downloading the app and signing up, and it generated the largest spike in app downloads in the App Store’s history – bigger than any launch done by any of the most popular apps you would have on your phone. That was right around the time when I started; it was pretty amazing. Since then, I have served as the staff engineer on the Chick-fil-A App for iOS.

Around fall of 2017, given the massive growth that Chick-fil-A One had seen, there was a proportionally increasing demand from the business to add more and more functionality to the app – namely Chick-fil-A Delivery. While the existing app was serving customers and operators in ways we never had before, we realized that the app had started to outgrow its original software architecture and that making large-scale enhancements would become increasingly more difficult over time. At that point, my Android counterpart and I embarked on a journey to completely rebuild brand new versions of the Chick-fil-A app for our respective platforms.

Between November 2017 and August 2018, my team and I built the Chick-fil-A app that you’re using today. We launched it that August with a completely reimagined user experience and an updated loyalty program that introduced different status levels and the concept of points. Since then, I’ve continued to lead a growing team focused on the engineering efforts on the Chick-fil-A app as well as other iOS apps within the Chick-fil-A commerce ecosystem.

I am also closely involved with the development of our iPad-based point of sale app that restaurant team members use for taking orders in the drive-thru. Though this app has been used in restaurants for quite some time, our team began working late last year to refresh the app with an updated interface and enhanced performance. With the onset of the COVID-19 pandemic in March this past year, this app became more important than ever, and throughout the course of 2020, our team has worked closely with operators to enable new service models and grow their businesses by using this tool. Over the past year, both of these products have grown to the point that large majority of our sales are flowing through them. It truly is an exciting time to be working on customer technology at Chick-fil-A, and I am fortunate to be a part of it.

Over time, my average day has shifted from being heavily weighted toward writing code more in the direction of planning, strategy, leadership and support, but on the days that I am not scheduled for many meetings, I really get my hands in the code to build things. What a given day looks like tends to be most influenced by what part of the week it falls in, but it really does vary. I could be building a new shared framework to be used in either of our apps or I could be in strategy and planning discussions. I could be reviewing pull requests from my team that include new features or bug fixes to the app or I could be coordinating with our Quality Engineering team about what changes to expect in an upcoming release. I could be building a new user-facing feature in the app, or I could be writing the release notes to be published in the App Store. I’m really fortunate that my role allows me to spend a lot of time in different stages of the product development process.

Is it safe to say that Auburn prepared you well?

Absolutely. I credit Auburn and the experience I had there for a great deal of my success. As an engineer, Dr. Stroud’s digital logic circuits class and Dr. Chapman’s introduction to algorithms classes are two that stand out to me as highly impactful to the way I think about technology as a whole and the way I use it to efficiently solve challenging problems. As a leader, I give Auburn a great deal of credit for empowering me to have a very well-rounded experience.

When I gave Cupola tours myself, one of the things I always highlighted — and it’s still true — is that, yes, Auburn obviously gives you a top-notch education, but there’s also so many opportunities to get plugged in other ways around campus and within the College of Engineering that really foster leadership, and I think that’s something that helps Auburn graduates really stand out. I learned the hard skills in the classroom, but I also developed so many soft skills that have allowed me to succeed when working with peers and among teams in the workplace.

Chick-fil-A sauce is the best, right?

Oh, for sure. But ranch is my second favorite. I eat a lot of the spicy stuff. Ranch on the spicy chicken? That’s good.