Auburn University’s Huntsville Research Center celebrated its fifth anniversary on April 8 before a large audience of scientists and engineers, as well as community and political leaders. 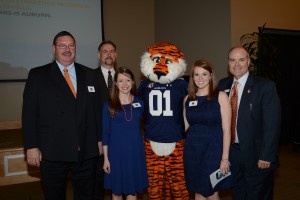 The Huntsville Research Center enables Auburn faculty members to bring innovative research to Huntsville to support federal agencies in the area, as well as the large number of technology-based industries that interact with them. The center also assists in providing employers with interns, co-op students and graduate researchers, many of whom become permanent residents in the area.

Rodney Robertson, who directs the center, notes that these activities have an important effect not only on the Huntsville area, but on the state of Alabama as a whole in terms of economic development. He adds that Redstone Arsenal and Marshall Space Flight Center oversee more than $60 billion in federal budgets, that bring with them immense research and technology needs that can be addressed by partnerships with the academic community, including the College of Engineering.