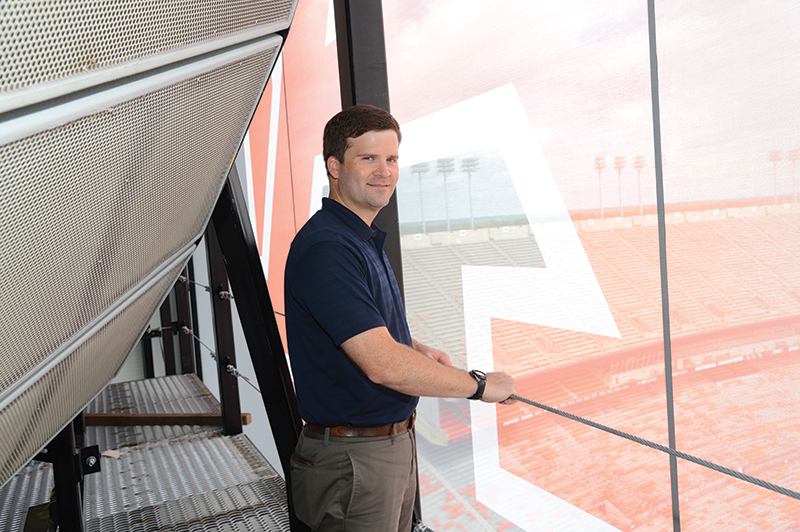 Mike Stallings’ steel design class – CE 4650 – was packed to capacity on an early Wednesday morning this fall. The reason: Jared Kime, who designed the structural components of Auburn’s new 200-foot stadium scoreboard, was there to talk about the process, and the back story on what it took to build college football’s largest video board.

Kime, a 2005 graduate in civil engineering, works for Birmingham-based civil and structural engineering firm LBYD, and served as the video board’s lead designer and project manager.

An eight-year veteran of LBYD in structural engineering, Kime noted the old board had been in place in one form or another for 40 years, serving as both a camera platform and scoreboard. Its size was approximately 18×40 feet. Structurally, the new board, at five times the length, needed to have supports that were up to eight times stiffer than the ones used for the existing board.

Because of the complexity of the subsurface area around the stadium’s south end zone, it was also necessary to install a micropile system to complement the four existing columns that held the old board in place. The micropiles consist of 46 10-inch diameter piles in six separate pile caps that fan out into the ground and are grouted 15 feet into bedrock under 35 feet of soil.

Brad Christopher, the engineer of record and also a member of the LBYD team, noted that while the board and supporting structure create tremendous downward forces, wind forces on the board can be extreme as well. Indeed, the new board – rated to 95 miles per hour winds – is so large that it would take a huge load during normal conditions.

“The main concern for us is the fans’ safety. We had to account for the fact that we were building a giant sail that was not only 200 feet wide, but sat at an elevation of 200 feet,” Kime said.

“Although it is highly unlikely that anyone will be in the stadium if there are winds near 100 miles per hour, the structural integrity of the video board is hugely important to us. Some have remarked that it even looks overbuilt, but, again, the bottom line is safety,” he stressed.

“We had to commit to a new 12-story structural steel tower in the center of the design to support the 50-ton video board in a way that fed the side loads to the center, as well as account for the gravity load,” he told students in the class.

Although the finished video board has the characteristic of a monolithic, uninterrupted expanse, it is actually composed of 162 individual screens stitched together by the supporting structure.
“This means it was necessary to create horizontal and vertical x-bracing in the steel structure to ensure that the lateral movement of the screen was consistent and would not distort the image on the screen, or damage the individual components,” Kime added. “Again, differential in the size factor of the new screen over the old one is a 435 percent increase.”

Kime also spent some time describing to the class in detail how software was used in designing the structure, from the viewpoint of analysis and 3-D modeling, down to the details of how the stresses would act on the thousands of bolts holding the structure together.

To Stallings, it was important that his class understand not only the physical aspects of engineering steel in these kinds of projects – and more than 800 tons were used – but also the project management that goes into these large-scale structures as well.