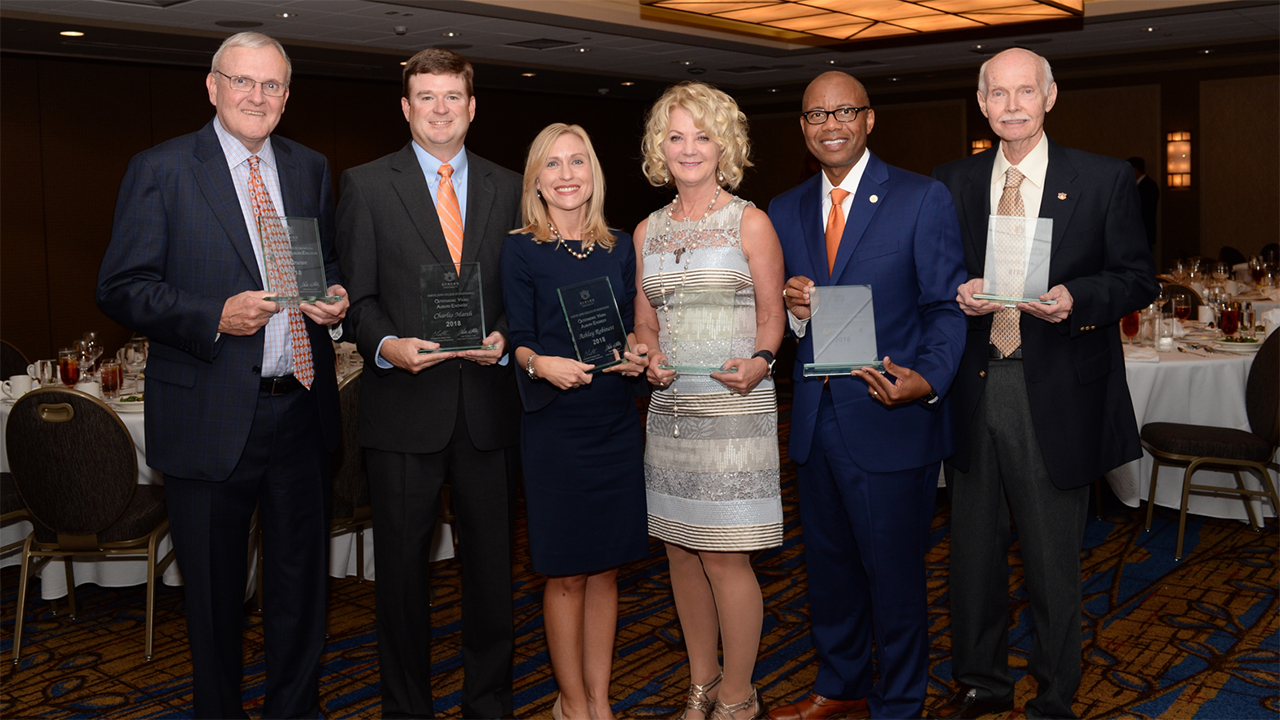 Six outstanding alumni and ambassadors of the Samuel Ginn College of Engineering were honored in September at The Hotel at Auburn University by the Auburn Alumni Engineering Council for their distingushed professional careers. These alumni included three were recognized as Distinguished Auburn Engineers, two as Outstanding You Auburn Engineers and one of superior for Superior Service to the college.

Leslee Belluchie is a 1983 graduate with a bachelor’s degree in mechanical engineering whose career has been focused in support of the nation’s defense and intelligence communities. She started her career as an engineer for Westinghouse, and eventually founded and operates a private equity fund. She has held several leadership roles, including serving as the president and CEO of National Security Partners, a cybersecurity company; founder and co-managing member of FedCap Partners LLC, a private equity fund focused on investment in high-end government services companies; and executive vice president and chief marketing officer of SI International, a publically traded government services company.

Belluchie has served on the Auburn Alumni Engineering Council, chaired the Mechanical Engineering Advisory Board and is a member of the Auburn University Research Advisory Board and the Auburn University Foundation Board. She is also a member of the George Washington University Katzen Cancer Center Board of Directors. As significant contributors to Auburn, Belluchie and her husband, Rick Knop, are members in the university’s Samford and Foy societies, and the college’s Keystone, Ginn and Eagles societies. Their gifts include an endowed fund for excellence in mechanical engineering and naming of the Lt. Gen. Ronald Burgess Cyber Laboratory in the Shelby Center.

Cowan is a significant contributor to Auburn Engineering and is a member of the college’s Ginn and Keystone societies, the university’s 1856 and Foy societies and athletics’ Heisman Society. In addition, he serves on the Auburn Alumni Engineering Council and recently named the Recruiting and Scholarship Reception Area in the upcoming Brown-Kopel Engineering Student Achievement Center.

Kenneth Kelly is a 1990 electrical engineering graduate who also earned his executive MBA in 1998 from the University of Alabama in Tuscaloosa. Kelly serves as the chairman and CEO of First Independence Bank, the 10th largest African-American-controlled bank in the country. Prior to leading First Independence, he held several positions at Alabama Power, Georgia Power and Southern Power, leading negotiations for solar projects totaling more than $3.4 billion in partnership value. In 2012, while employed at Southern Power’s Business Development group, he negotiated Southern Power’s first $500 million solar facility in the state of California.

As a result of his leadership contributions and professional expertise, Kelly has been appointed to the Federal Reserve Bank of Chicago’s Community Depository Institutions Advisory Council for a three-year term and has been appointed nationally to the FDIC’s Community Bank Advisory Committee to provide guidance to the chairwoman on policy for a two-year term. In May 2018, he was presented The Spirit of Detroit Award by the Detroit City Council. He serves as vice chair of the Auburn Alumni Engineering Council and is a member of the university’s Foy and Samford societies, as well as the college’s Eagles Society. He recently named the Engineering Academic Excellence Program Reception Area in the upcoming Brown-Kopel Engineering Student Achievement Center.

Charles Marsh is a 2001 civil engineering graduate who also earned an MBA from UAB in 2011. Marsh is a sales engineer at American Cast Iron Pipe where he handles technical sales for American’s Spiral Weld pipe from Virginia to Missouri, down through Oklahoma to Texas and across to Florida.

Ashley Robinett is a 2001 chemical engineering graduate who serves as the vice president of Alabama Power’s Corporate Real Estate division where she is responsible for managing the company’s land holdings in support of business objectives. She began her career at Southern Company in 2001 as an engineer for Alabama Power’s wholesale subsidiaries. Robinett then worked several years in fuel services, managing emission allowance procurement and other strategic environmental issues, before returning to Southern Company in 2008. She managed the wholesale subsidiary’s resource planning, risk analysis and business case development functions, including renewable energy. In the years following, Robinett served as the assistant to the executive vice president and chief operating officer of Southern Company, and as the assistant to the president and chief executive officer of Alabama Power.

She is a member of the college’s 100+ Women Strong program aimed at recruiting, retaining and rewarding Auburn women in engineering. She’s also a member of the university’s Samford, Foy and Petrie societies and engineering’s Eagles Society. In addition, she will be honored in March with the Auburn Alumni Association’s 2018 Young Alumni Achievement Award.

In 2012, Larry Benefield retired as dean of the Samuel Ginn College of Engineering after a distinguished career of more than three decades at Auburn University. He earned his bachelor’s degree in civil engineering from Auburn in 1966 and then spent four years as a civil engineering officer in the U.S. Air Force where he was awarded the Bronze Star for service in Vietnam. Benefield joined the Samuel Ginn College of Engineering as an associate professor of civil engineering in 1979. In 1998, he was named interim dean and was appointed dean in 2000. As dean, he led the college to significant advances, attracting the attention of peer institutions and moving Auburn Engineering to the highest rankings in its history. Under his leadership, the college successfully completed a $154 million facility enhancement program and launched the nation’s first undergraduate degree in wireless engineering. He oversaw the opening of Auburn’s MRI center and played a pivotal role in the launch of the Auburn University Huntsville Research Center.

Benefield was inducted into the State of Alabama Engineering Hall of Fame in 2013 and was awarded the Auburn Alumni Association’s Lifetime Achievement Award — the university’s highest honor — in 2014. He is a member of the university’s Samford and Foy societies and the college’s Ginn Society.